The “Winners” and the Losers of a Potential Trade War

Talks of a trade war have been dominating headlines in recent days, with investors being spooked that the latest US tariffs could spark retaliation from other major economies. The “good news” is that recent price action has given us a taste of what to expect in financial markets should the situation escalate from here.

Blink and you missed it. That is how quickly trade-related headlines have been hitting the wires recently, and how sharply markets have been responding to them. The trade narrative came into the spotlight last week, when the US administration announced its plans to slap tariffs on steel and aluminum imports. The announcement prompted major economies like the EU to indicate they will respond to protectionist measures in kind and introduce their own tariffs on the US, generating fears that the situation could rapidly escalate into a retaliatory trade war.

The market movements that ensued – as investors priced in the risk of such a war – are probably one’s best guide of what to expect in case tensions intensify. So, which assets stand to lose and gain the most in a potential tit-for-tat trade war? Let’s start with the losers, as they outnumber the “winners” and require more explaining.

In the G10 FX spectrum, the Australian and Canadian dollars probably stand to lose the most. Australia is an export-focused economy, so it could take a heavy hit in case global trade slows. Besides that, the Aussie is very sensitive to developments in China and as such, a slowdown in the Chinese economy due to tariffs would probably weigh on Australia too. Strangely enough, while the New Zealand dollar shares many similar qualities, it has not been responding too negatively to the tensions.

Canada is another major commodity exporter and since it exports the vast majority of its goods directly to the US, its economy would likely suffer in case of increased protectionism. While Canada will gain an exemption from the steel and aluminum duties, according to the White House, the duration of this exemption will depend on how NAFTA talks progress. This implies that the loonie will remain vulnerable to NAFTA negotiations, and also to the risk of tariffs by other countries. 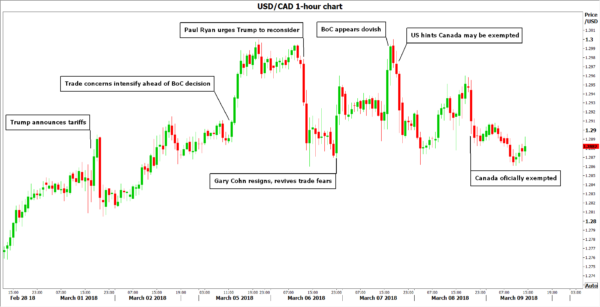 The currencies of emerging economies would be rather defenseless as well. Most of these nations are very sensitive to investors’ risk appetite and global trade, and if trade volumes fall, their currencies could follow suit. Prominent examples include the Mexican peso and the South African rand. In the case of Mexico, the US said it will be excluded just like Canada, but that certainly does not mean the currency is now “out of the woods”.

The greenback weakened notably after the tariffs were announced. However, it lost ground mainly against major currencies, like the euro and the pound, while it managed to gain some ground against the likes of the South African rand. Thus, markets seem to be speculating that increased protectionism in the US would see its own economy perform worse than other developed economies like the Eurozone, but better than emerging economies that would be hit the hardest from trade restrictions. Thus, escalating trade tensions may exert upward pressure on pairs like euro/dollar and sterling/dollar.

Stocks, particularly in Asia – but France seems vulnerable too

Equities would likely be one of the worst performing assets in a trade war environment. There are exceptions of course, which will be outlined below. Speaking about stock markets in general though, they are likely to lose out as companies are faced with higher costs due to tariffs, and also find it more difficult to sell their products abroad. In the end, corporate profits would probably take a hit, exerting downward pressure on equity prices.

Based on the magnitude of the market reactions in recent days, one can argue that Asian stocks are likely to feel the heat even more than their US or European counterparts. This is reasonable, considering that many Asian nations are focused on manufacturing and exporting, and are thus more exposed to changes in global trading volumes.

The biggest losses may be recorded in Japanese indices like the Nikkei 225 and the Topix. Since the US tariffs were announced, these indices have declined by much more than their counterparts, and the reason for this discrepancy may be related to the yen. The yen is considered as a safe haven and tends to gain in times of turmoil, such as right now. However, its appreciation typically weighs on Japanese stocks, as the stronger currency hurts the profits of major exporting firms, most of which are listed on the Nikkei. 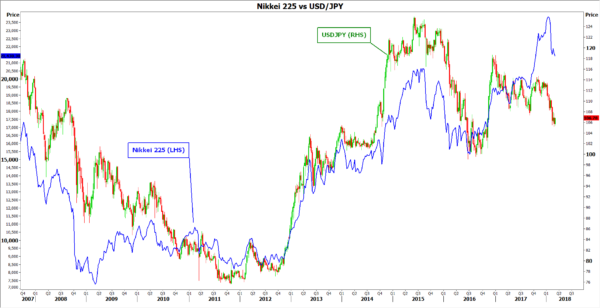 The next most vulnerable benchmark seems to be the French CAC 40, which has been under severe pressure lately, perhaps due to the concentration of car and plane manufacturers in the index, many of which are major exporters. The Euro STOXX 50 also posted losses, but to be fair to European indices, some of their underperformance may be related to the political events in Italy, not just speculation on tariffs. Hong Kong’s Hang Seng index appears to be at risk as well. Funnily enough, these uncertainties seem to be affecting US and Chinese equity benchmarks the least so far. The S&P 500, Nasdaq 100, and CSI 300 are all higher overall in March.

Commodities like oil are considered relatively risky and are thus sensitive to changes in investors’ risk appetite. Given that risk sentiment and confidence would likely take a hit in the event of further protectionism, oil prices might come under pressure. From another perspective, tariffs would pose a danger to global economic growth and thereby, hinder demand for oil.

The JPY and the CHF are seen as traditional safe haven currencies, that typically appreciate in times of turmoil as investors seek protection. This time was no exception, with both currencies gaining ground amid the trade uncertainties. 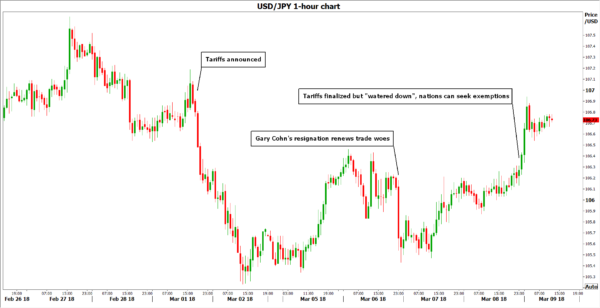 What was surprising, was seeing broad gains in the euro. While this may also reflect other factors, like speculation the ECB would appear hawkish at its March gathering, it is worth noting that the euro has served as a “safe haven” in the past. In case a trade war breaks out, the common currency could be viewed as a haven again, especially considering that European nations tend to do a higher portion of their trade between themselves and would thus be less impacted by a deterioration in global trade.

Precious metals, such as gold and silver

Precious metals have traditionally been viewed as safe assets, and true to that statement, both gold and silver saw a jump in their prices after trade headlines started to hit the wires last week.

A good example of this is stocks of US steel companies. After Commerce Secretary Wilbur Ross first hinted at steel tariffs back in February 16, the stock price of the US Steel Corporation surged 17% in a single day. The logic is that faced with weakened competition due to the tariffs, these firms could well see their profits go up, and stock prices would follow. Another example is gains in US aluminum stocks after the aluminum tariffs announcement.

Bonds tend to attract safe haven demand, same as precious metals. The idea is that unless you are in a hyperinflationary environment or in a debt crisis, governments will typically pay your money back, and thus your investment is considered as “safe”.

There are generally no “winners” in a trade war, but some stand to lose more than others. While the probability of a full-blown trade war is still relatively low, it is not something to dismiss either as the past week has shown. It will be critical to see how major economies like the EU and China respond to the US tariffs. If they reply in harsh fashion, that could provoke more US action, starting a vicious protectionist cycle. If cooler heads prevail though and tensions deescalate, then the market moves that ensue will probably be the opposite of what was described above: safe havens could tumble, while riskier assets and trade-sensitive currencies may regain their footing.

Finally, the ideal proxies for trade tensions in the FX market may be pairs such as aussie/yen, loonie/yen, and Mexican peso/yen, as these will likely respond very sharply to increased protectionism.