Monday March 12: Five things the markets are talking about

The ‘mighty’ U.S dollar has eased a tad along with U.S treasury prices and most commodities.

On Tuesday, the OECD will release new forecasts for growth in the major economies, and likely will raise its projections for the U.S in response to the tax and spending packages passed in recent months. In the U.K, Treasury chief Philip Hammond is due to present fresh forecasts for their economy and public finances in a statement to Parliament. In the U.S, headline inflation may have edged up to +2.2% in February, though consensus for core inflation is to remain at +1.8%.

In China, data on industrial production (IP), retail sales and fixed-asset investment all out on Wednesday and are likely to point to slower growth. While in the U.S, retail sales for February will be released.

Note: In December, Norway’s central bank governor appeared to turn more bullish on the Norwegian economy, with inflation picking up in Q4, 2017.

On Friday, the U.S will release housing starts data for February. Market expectations are looking for a decline after January’s robust growth print.

1. Stocks trade in the ‘black’

In Japan, the Nikkei share average rallied to a two-week high overnight helped by tech stocks, but early gains were trimmed as a suspected political scandal dampened sentiment. The Nikkei ended +1.7% higher, while the broader Topix rallied +1.5%.

Note: Questions over the sale of state-owned land at a huge discount to a school operator with ties to PM Abe’s wife became public last year.

Down-under, Aussie shares rallied on Monday as Friday’s U.S jobs report has boosted global investor sentiment while material stocks finished strong on news that Australia could be exempted from new U.S trade tariffs on steel and aluminum imports. The S&P/ASX 200 index rose +0.6% at the close of trade. In S. Korea, the Kospi allied +1%.

In Hong Kong, benchmark stock index traded atop of their five-week highs as fears of a global trade war, and faster U.S rate hikes eased. The Hang Seng index rose +1.9%, while the China Enterprises Index gained +2.1%. 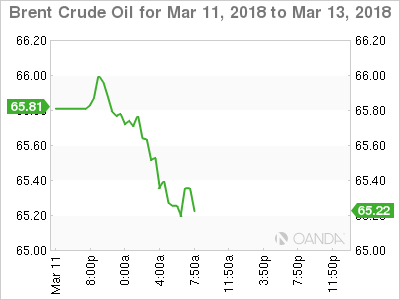 Note: Despite the lower rig count, activity remains much higher than a year ago – 617 rigs were active. The U.S is now the world’s no. 2 crude oil producer (+10.37m bpd), ahead of top exporter Saudi Arabia. Only Russia pumps more, at nearly +11m bpd.

Gold prices have eased, pressured by a stronger equity market on easing fears of inflation and faster U.S rate hikes. Spot gold is -0.3% lower at +$1,316.10 per ounce. 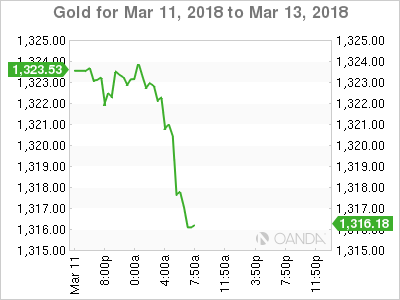 On Thursday, Norway’s central bank (Norges) is widely expected to keep its benchmark interest rate at +0.50%, but some analysts are debating that the recent reduction of the bank’s inflation target to +2% from +2.5% and robust economic activity support the case for a rate hike in Q3/Q4.

Elsewhere, German Bund yields held within sight of their recent lows after the ECB’s Benoit Coeure said short-term interest rates are to stay at “very low levels,” supporting market consensus any exit from stimulus will be slow. German 10-year yield is unchanged at +0.65%. 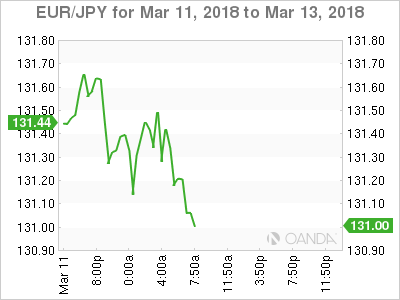 The USD is a tad softer in quiet trading.

EUR/USD (€1.2310) trades in the middle of this years four big figure range on market expectations that the ECB is in no hurry to hike rates once it potentially stops its QE-related balance sheet expansion in six-months.

Sterling (£1.3855) is a tad firmer as dealers forecast their expectations for Gilt issuance of +£98.2B for current fiscal year (was +£115.1B back in Nov statement) as the Chancellor of the Exchequer prepares to announce the smallest deficit in a decade during his Spring statement on Tuesday.

USD/JPY (¥106.58) is slightly lower as global risk appetite improves. At the moment, the JPY has managed to shrug-off PM Abe’s land transaction scandal – the Finance Ministry (MOF) admitted that the related Moritomo land sale documents were altered. PM Abe’s wife said to be among the names of those deleted from the MOF documents.

New Zealand consumer prices fell last month, with ANZ’s monthly gauge down -0.3% in February from January on an -18% plunge in university fees.

Ex-college fees, growth would have been +0.1% last month. Meanwhile, the overall number was +3.1% higher than a year earlier.

Digging deeper, impacting the February’s inflation print the most was rent and home buying.

Nevertheless, in line with global expectations, analysts believe that New Zealand’s broad-based inflation pressures are still lacking and that the data does not suggest that a sustained lift in price growth will appear any time soon. 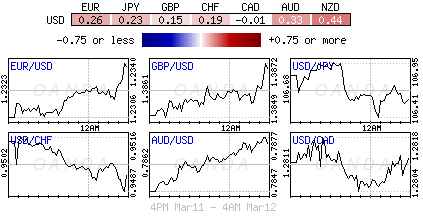