Action Forex
HomeContributorsFundamental AnalysisYen Weakens On Politics, All Eyes On US Inflation

Yen Weakens On Politics, All Eyes On US Inflation

FOREX: The dollar was trading higher versus a basket of currencies on Tuesday, posting notable gains against the yen in the midst of a political scandal in Japan that raises questions about the government’s ability to deliver moving forward.

STOCKS: US markets were mixed yesterday. The Nasdaq Composite closed 0.4% higher, reaching another record high, but the S&P 500 and the Dow Jones fell by 0.1% and 0.6% respectively. Futures tracking the Nasdaq 100, S&P and Dow are flashing green, pointing to a higher open, but the broader direction of these indices today will likely depend on the upcoming US CPI data. Asian benchmarks were mixed as well. Japan’s Nikkei 225 and Topix closed higher by 0.7% and 0.6% correspondingly, but the Hang Seng in Hong Kong was down by 0.3%. In Europe, futures tracking most of the major indices were in negative territory, but only marginally so.

COMMODITIES: Oil prices fell on Tuesday, with WTI and Brent crude declining by 0.1% and 0.2% respectively, both benchmarks extending losses from yesterday. The losses are being attributed to a report by the Energy Information Administration (EIA) which projected an increase in crude production from major US shale firms, reigniting concerns of an oversupplied market. Today, the weekly private API inventory data will be in focus, ahead of the official EIA figures tomorrow. In precious metals, gold prices declined by 0.25%, last seen around the $1318 per ounce handle. Today, the yellow metal will probably get its directional cue from any movement in the dollar, after the US CPI data. 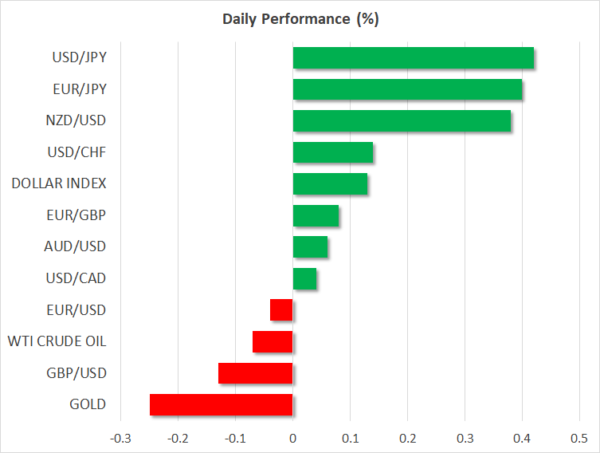 The dollar index was 0.1% higher on Monday after shedding 0.2% the day that preceded. February’s CPI reading out of the US due at 1230 GMT, despite not being the Fed’s preferred measure of inflation, is still keenly awaited ahead of the central bank’s meeting next week and is likely to give short-term direction to the US currency.

Dollar/yen was up by 0.4% at 106.85, more than making up for yesterday’s decline. A scandal involving Japanese Finance Minister Taro Aso, a key individual in PM Abe’s government, is casting doubts over the government’s ability to deliver on its economic policy agenda moving forward; the incident is seen as threatening Shinzo Abe from securing a third term as leader of his party when a leadership vote takes place in September. The euro was also up by 0.4% against the Japanese currency, with euro/yen trading at 131.79.

Euro/dollar was little changed at 1.2324. The pair has been unable to make up for the losses incurred after ECB chief Mario Draghi struck a cautious tone on inflation in the euro area last Thursday, saying “victory can’t be declared yet on inflation.”

Sterling lost 0.1% versus the greenback, trading at $1.3887. The pair posted gains yesterday after junior Brexit minister Robin Walker said that the UK is very close to agreeing the details of an implementation period with the EU for its transition out of the bloc. Euro/pound was mostly unchanged after recording losses on Monday.

Aussie/dollar traded higher, though only marginally so, and kiwi/dollar was up by 0.4%. Both pairs posted fresh 2-week highs of 0.7884 and 0.7325 respectively. The aussie was lifted after the NAB’s index of business conditions rose to its highest on record in February, boosting optimism on the economy. 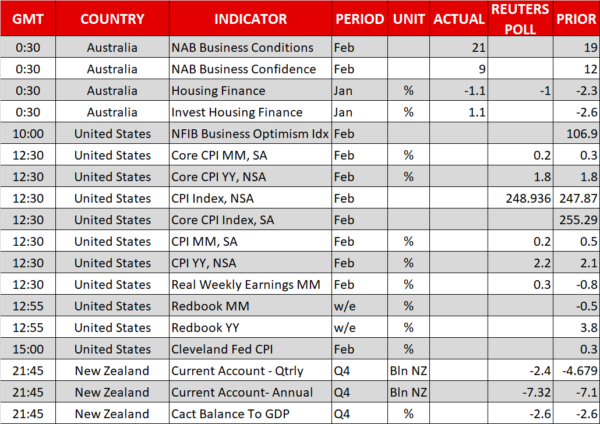 Day ahead: US inflation data to drive the dollar; UK Spring statement in focus with politics also in the spotlight

The main event today will be the release of the US CPI data for February at 1230 GMT. The forecast is for the headline CPI rate to tick up to 2.2% in yearly terms from 2.1% previously, while the core rate is projected to hold steady at 1.8%. These figures will be closely tracked ahead of next week’s Fed policy meeting, as they have the capacity to impact market expectations ahead of the gathering.

The latest set of US wage data – released on Friday – showed that wage growth remains subdued, easing pressure on the Fed to raise rates aggressively. Markets will be looking for a confirmation of this narrative today. If the CPI data disappoint as well, for example if the core rate surprisingly ticks down, then investors could scale back their expectations over how many hikes the Fed will deliver this year. Such an outcome would likely weigh on the dollar, but push US stock indices even higher. On the contrary, an upside surprise in the CPI prints could revive some inflation concerns and heighten speculation for a more aggressive rate path by the Fed, thereby helping the dollar to recover and simultaneously weighing on stocks.

In the UK, Chancellor Philip Hammond will address the Parliament at 1230 GMT in order to present the Spring budget statement. While this budget update is typically used to announce new policy measures, this is unlikely to be the case today, as major announcements have recently been reserved for the main budget, the Autumn statement. Instead, markets may look at the updated economic forecasts for the UK economy, while media reports suggest there may also be some details on the effects of the Brexit divorce bill on UK public finances, both of which could impact sterling.

More broadly, Brexit will likely remain a key driver for the pound over the remainder of the month. Junior Brexit minister Robin Walker said yesterday that the UK and the EU are very close to agreeing a transitional divorce deal, something the EU is expected to approve at its March 22-24 summit. Any comments from UK and EU officials ahead of the summit will probably be critical for sterling’s forthcoming direction.

In energy markets, investors will look to the private API inventory data at 2030 GMT, in order to gauge whether US production has really peaked for the time being, something signaled by the decline in the Baker Hughes oil rig count on Friday.

In politics, all eyes will be turned to the US, where a special election will be held in Pennsylvania for an open seat in the House of Representatives. While a single House seat is usually not very important in US politics, this time is different. Back in 2016, Trump and the Republicans won this district by a landslide, but opinion polls now suggest that the Republican and Democratic candidates are running neck and neck. If the Democratic contender wins, or comes close to winning, that would be a clear sign that the Republicans are at risk of losing districts they won easily in 2016. Such an outcome could heighten speculation that the Republicans may lose control of Congress at the mid-term elections later this year. 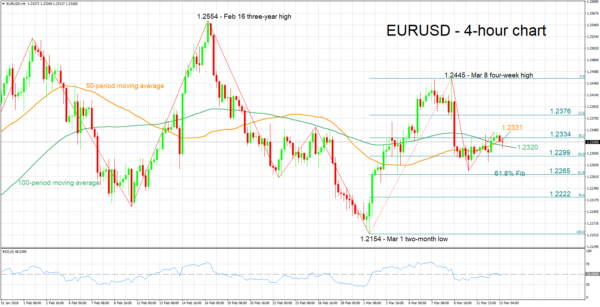 EURUSD has been ranging in recent days, moving within the 38.2% and 50% Fibonacci retracement level of the March 1 to March 8 upleg for the most part. The RSI has been largely moving sideways, pointing to a predominantly neutral picture in the short-term.

Stronger-than-expected CPI figures out of the US today, might lead market participants to price in a more aggressive Fed tightening cycle and thus lead to dollar strength. Euro/dollar might find support around the 100-period moving average at 1.2320 in this case – price action is taking place close to this level at the moment – with steeper declines bringing into view the range around the 50% Fibonacci level at 1.2299, including the 1.23 handle that may be of psychological significance.

If the readings disappoint though, euro/dollar could head higher. Resistance could be taking place at the moment in the area around the 50-day MA and the 38.2% Fibonacci mark, ranging from 1.2331 to 1.2334. A move above would turn the attention to the 23.6% Fibonacci level at 1.2376.

It is notable that despite prospects of more Fed rate hikes being theoretically dollar-positive, there are other currency drivers at play that might act to the detriment of the dollar. Market participants seem to be increasingly wary of these drivers.