Japanese trade data for February will be made public on Sunday at 2350 GMT. Exports are anticipated to grow for the 15th straight month on a yearly basis, albeit at a much slower pace relative to previous months, and imports are expected to expand for the 14th consecutive month. Yen pairs will be gathering attention as the figures hit the markets, especially in light of the latest developments on the trade front. It is those developments though that seem to have the greatest capacity to rattle yen pairs, at least at the moment, rather than the figures themselves. Also a potential market mover, is the Summary of Opinions of the Bank of Japan’s board members which will be released at the same time as the numbers on trade.

Exports are projected to expand by 1.9% y/y in February and imports by 17.1%. January’s respective figures stood at 12.3% and 7.9%. The world’s third largest economy is forecast to report a trade deficit of around 100 billion yen (close to $943 million) in February, roughly ten times smaller January’s deficit. 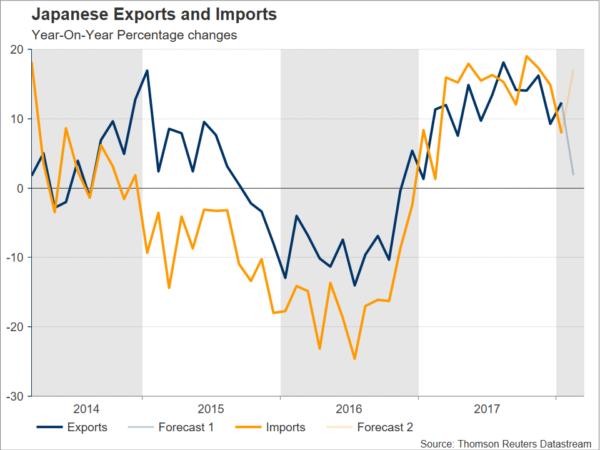 The slowdown in exports is attributed to the timing of the Lunar New Year celebrations which fell in February this year rather than any other worrying factors. Barring external shocks, exports are expected to remain in an upward path on the back of strong overseas demand. Such an external shock though could be an escalation of trade tensions, especially after the decision by the US administration to impose tariffs on steel and aluminum and the ongoing inflammatory rhetoric by the country’s officials. Japan has asked to be exempted from the tariffs as the US has left the door open for other countries, beyond Canada and Mexico, to be granted that right.

It is interesting that Japan being a major exporting power and thus standing to lose substantially should a trade war occur, its currency has recently benefitted from safe-haven flows on the back of rising global trade uncertainty. It thus seems that the yen’s safe-haven allure trumps trade concerns at the moment. If tensions escalate though, rendering a hit to Japan more “visible”, then the aforementioned flows may be directed to other assets that also possess safe-haven attributes – at least in investors’ minds – such as gold, which interestingly was not boosted in the aftermath of the latest trade developments. A G20 meeting on the agenda next week might provide the backdrop for the world’s biggest economies to engage in constructive discussions on trade issues.

Elsewhere, a theme that has spurred yen rallying this year, but also during the latter part of 2017, has been the growing expectations that the Bank of Japan is paving the way for policy normalization. The comments of BoJ Governor Haruhiko Kuroda, who said that the central bank will start thinking about how to exit its ultra-loose monetary policy stance around the fiscal year starting in April 2019, were those that fueled a yen rally earlier in March, pushing dollar/yen to a 16-month low of 105.23. Market participants seem to have “stuck” to a BoJ normalization narrative, appearing much more willing to long the yen in the face of hawkish-perceived comments than sell it on dovish ones. Indicatively, the BoJ has made it clear time after time that it continues to remain committed to ultra-loose monetary policies, with Kuroda himself clarifying his aforementioned remarks in support of an outlook of aggressive monetary stimulus. Yet the yen has not experienced declines, at least not considerable ones, in the face of those clarifications. Within the context of all these, the Summary of Opinions of the BoJ’s board members pertaining to the March 8-9 meeting that is also scheduled for release on Sunday at 2350 GMT could lead to movements in yen pairs.

Safe-haven flows due to heightening uncertainty over trade or a hawkish-perceived tilt in BoJ policymakers’ views out of the Summary of Opinions report, are likely to lead to yen appreciation. In this case, support for dollar/yen could come around the 16-month low of 105.23 that was recorded on March 2, with steeper declines turning the focus to the area around 103 which was relatively congested back in 2016. On the upside and in case of receding risks around global trade, the range around 107, which also includes a bottom from the recent past at 107.31, might act as a barrier to the upside. If this area is overcome, then the pair would start challenging the upper bound of the recent range between roughly 105–108.

Year-to-date, the yen has appreciated by 5.8% relative to the greenback, the most than any other major currency; the Norwegian krone is a close second, having gained around 5.8% as well versus the US currency. A yen-supportive factor is Japanese investors’ tendency to repatriate capital ahead of the end of the fiscal year which is due later this month.

Elsewhere and also of significance for Japan and the yen, is the eruption of a land scandal implicating Prime Minister Shinzo Abe and Finance Minister Taro Aso. The latter is facing pressure to resign with reports suggesting he will not be attending the upcoming G20 meeting, something which serves as a testament to the seriousness of the situation. Weekend poll results on the approval rating of PM Abe, who will be running for a third term as leader of his party when a leadership vote takes place in September, will be attracting interest in this respect.

Positioning though in relation to the scandal is “complicated”. Some say that given it weakens Abe, whose administration’s economic policies are supportive of a depreciating yen, then more pressure on the prime minister should boost the yen. Who is to guarantee though that a change in the country’s leadership would translate into a shift in weak-yen policies? Also, what if developments also weigh on the country’s outlook for growth?

Lastly, other data getting attention out of Japan as the week unfolds are Thursday’s flash Nikkei manufacturing PMI for March (0030 GMT) and inflation figures for the month of February (2330 GMT). Core inflation, which includes oil items but excludes fresh food prices, is forecast to stand at 1.0% y/y, a faster pace relative to January’s 0.9% but still well below the BoJ’s target of 2%. The yen’s recent appreciation is anticipated to weigh on inflation moving forward by virtue of acting as a drag on import prices. Such an outcome is likely to have policy implications for the BoJ as well.