Stocks and Dollar Starting Q2 on a Positive Note

Monday April 3: Five things the markets are talking about

Global stocks and the "mighty" dollar are starting Q2 on a positive note despite investor caution ahead of the first "superpower" meeting between U.S President Trump and China’s Xi Jinping (April 6-7).

To investors, the markets "reflation" trade remains a concern, especially now that President Trump’s failed to push through his healthcare act in March. Can Trump get support for his anticipated tax cuts and infrastructure spending bills?

In Europe, the market focus will be on the French Presidential election. Will Marine Le Pen and her ideologies have an influence on government yields and the single unit, or will Macron squash her beliefs in round two?

On the data front this week is a busy week for central banks. The Reserve Bank of India (RBI) and the Reserve Bank of Australia (RBA) announce their respective rate decisions (Tues). The Federal Open Market Committee (FOMC) publishes their minutes (Wed) from its most recent meeting where they increased the fed funds rate by +25 bps.

Q1 was the best quarter for global equities in four-years.

In Japan overnight, stocks prices rebounded after the BoJ ‘Tankan’ report showed an improving outlook among their countries’ largest firms. The Nikkei’s gained +0.4%, while the broader Topix added +0.3%.

Note: Business sentiment improved for a second straight quarter to an 18-month high in March, but was slightly lower than market expectations.

In Hong Kong, stocks rallied led by infrastructure plays on the news that China will set up an economic zone. The benchmark Hang Seng index, which fell on Thursday and Friday, gained +0.6%, while the HK China Enterprises Index edged up +0.4%.

Elsewhere, South Korea’s Kospi and Singapore’s Straits Times Index were each up +0.3%, while Jakarta’s Composite climbed +0.6%.

In Europe, ahead of the U.S open, the Eurostoxx has climbed +0.2% in early trade after increasing +5.5% in Q1, the best quarter in two-years. 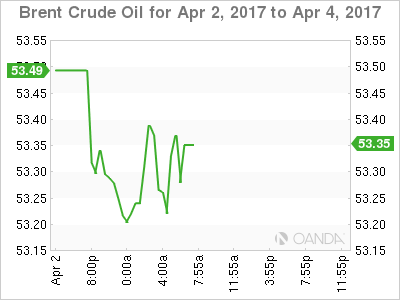 Oil prices start the week in the black as upbeat sentiment about economic prospects in Asia and Europe outweighed concerns a higher U.S. rig count strengthened worries about global oversupply.

The market continues to look for additional indicators for overall direction.

Gold prices have started the week on the back foot (-0.2% to +$1,246.84 per ounce), pressured by a stronger dollar and investor profit taking.

Note: The ‘yellow’ metal has been stuck between +$1,238-$1,260 with the risk skewed to downside based on rising expected interest rates and failure to break higher. 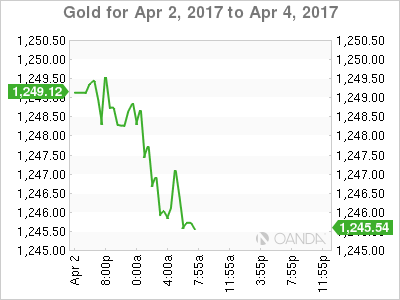 Government bond yields in the euro zone’s lower-rated countries (Spain, Italy and Portugal) have backed up this morning and are underperforming their peers as a reduction in the ECB bond purchase program takes effect.

April marks the beginning of the scaling back of the ECB’s bond buying purchases from +€80B to +€60B per month until the program ends in Dec.

Note: Various ECB speakers noted last week that this process not any signaling the start of tapering as it had the option to be more expansionary if needed.

The yield gap between Portugal’s 10-year bond and the German Bund have hit a four-week high of +368 bps, up +4 bps.

Note: French and peripheral bond yields have risen in recent months on the outside chance that far-right leader Marine Le Pen would win Franc’s Presidential race and push for a French exit from the E.U. 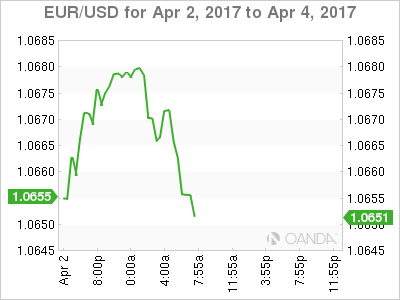 Ahead of the U.S open, the pound (£1.2508, down -0.37%) continues to experience volatility, as the pair has given back roughly half of last Friday’s gain, as selling has taken place following the release of U.K PMI data (54.4 from a revised 54.5 in Feb.) The reading for March was below consensus expectations of 54.6 and the lowest reading for four-months. 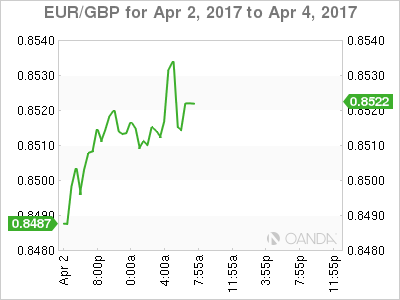 Reports this morning showed that German manufacturing growth reached a six-year high in March (PMI 58.3). Along with a stronger France and Italian headline print, adds to signs of a pickup in momentum in the region and the global economy.

On the weekend, a private survey on China’s manufacturing came in below market expectations (51.2 vs. 51.7), but still showed a healthy expansion after a similar survey by the government last Friday pointed to strong growth in the sector. 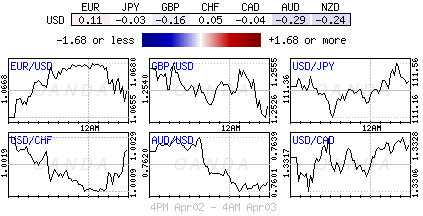