NFP To Give The Dollar Direction

There are perhaps more arguments in favor of a weaker U.S non-farm payroll this morning (08:30 am EDT), but given the recent strength of the dollar this week, the market seems to have been positioning itself for stronger labor-market numbers. If so, this would suggest that there should be a big reaction depending on the direction of the surprise.

Consensus is looking for an NFP headline print of +175k for March compared with a +313k rise in February that led to a massive equity selloff. The unemployment rate is seen falling to +4.0% from +4.1%. If the U.S labor markets report surprises positively today, something that is quite possible considering this weeks strong ADP report (+241k vs. +206k), will fuel investor concerns about the U.S economy overheating, rate expectations could rise, supporting the dollar even further.

If payrolls exceed +200k, wage-growth rises by +0.3% and the unemployment rate falls as expected, USD/JPY should have the strength and momentum to break ¥108. However, if wages rise by only +0.2%, the unemployment rate holds steady and payrolls are less than +200k, the market will surely consider pushing USD/JPY below ¥106.80 again.

To ease off global risk sentiment, the U.S. non-farm payrolls should show limited signs of wage inflation and a resilient jobs activity, and Fed Chair Jerome Powell should sound “fairly neutral” during his speech later this afternoon.

Elsewhere, heading into the NFP release, European shares are under pressure along with U.S futures after President Trump’s latest threat to target Chinese imports for another $100B in tariffs. U.S Treasury prices are climbing while commodities fall.

On tap: Fed Chair Powell will deliver a speech on the economic outlook during a visit to Chicago at 01:30 pm EDT. San Francisco Fed. President John Williams will speak later. Canadian job numbers are released at 08:30 am EDT.

1. Stocks down on further tariff threats

In Japan, equities fell overnight after U.S President Trump proposed fresh tariffs on +$100B of imports from China in an escalating trade dispute, but the benchmark Nikkei index managed to post a gain for the week. The Nikkei share average ended down -0.4%, while the broader Topix fell -0.31%.

In Hong Kong, shares rallied, catching up to global market gains in the previous session, but the threat of fresh U.S. tariffs quickly pulled stocks off their early highs. The blue-chip Hang Seng index and the Hang Seng China Enterprises index showed a similar gain of +0.8%.

Note: Markets in mainland China, Taiwan and Thailand were closed on Friday.

In Europe, regional indices trade modestly lower across the board on Sino/U.S trade fears. U.S futures have traded sharply lower on the news before making back over half the losses before consolidating ahead of March’s NFP release. 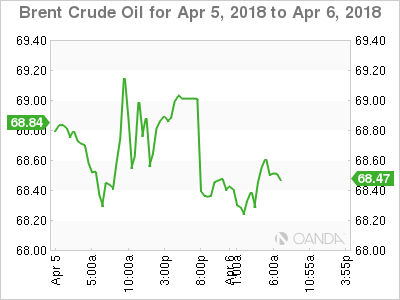 Oil prices are again under pressure after U.S President Trump’s threat of new tariffs on China reignited fears of a trade war between the world’s two biggest economies.

Note: Both contracts are heading for their biggest weekly fall since early March.

Providing some support to prices this week was the midweek EIA report that reported a +4.6m barrel draw in U.S crude inventories last week, compared with market expectations for an increase of +246k barrels.

The ‘big’ dollars direction after this morning’s NFP release will dictate crude prices next move.

Ahead of the U.S open and payroll numbers, gold prices have hit over two-week lows, weighed down by a firmer dollar even as President Trump re-ignited trade war fears. Spot gold is down -0.2% at +$1,324.01 per ounce, after hitting +$1,321.16 earlier in the session, its lowest since March 21. 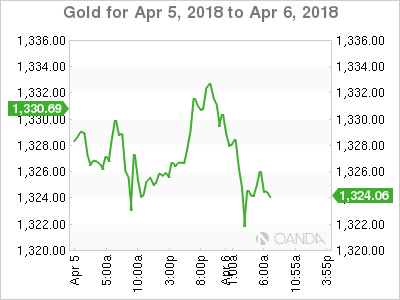 In Japan, longer-dated JGB’s prices continue to find support on steady investor demand for debt at the start of the new domestic fiscal year. Super-long (30-years+) JGB yields fell to a new 16-month low amid demand from life insurers and pension funds who were purchasing product to balance their portfolios at the start of the fiscal year, which began April 1. The 30-year yield fell -0.5%.

Fed Chair Jerome Powell will hold a speech on economic outlook at the Economic Club of Chicago (01:30 pm EDT). 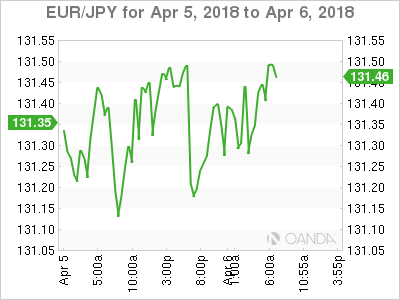 Despite trade war rhetoric, the U.S dollar is maintaining its firm tone heading into this mornings U.S payrolls release. The FX market has done a good job shrugging off the latest Trump trade rhetoric of more U.S tariffs as a means of getting China to negotiate on trade practices. The USD is poised to register a second consecutive week of gains against G10 currency pairs.

EUR/USD (€1.2241) is probing the lower end of its €1.22 range as Euro data continues to disappoint – Germany’s Feb. Industrial Production missed expectations (see below). GBP/USD (£1.4007) continues to trade atop of £1.4000. Pound ‘bears’ believe the positive Brexit news has largely been priced in, while the Northern Ireland border concerns remain unresolved. USD/JPY (¥107.34) remains little changed, waiting for NFP for guidance.

Elsewhere, TRY has plunged to a fresh record low against the dollar after President Erdogan’s criticism of monetary policy and economic management. USD/TRY now trades up +0.4% at $4.0635 after the pair hit a record high of $4.0665.

NAFTA – The Mexican negotiator is in D.C and the Canadian will be there today. There is a strong possibility of a weekend meeting and a possible situation update. If so, MXN and CAD to trade accordingly on Asians open next week. 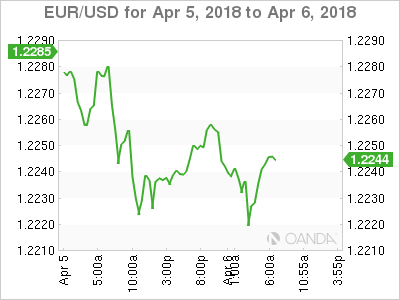 Data this morning showed that German industrial output fell in February, more than erasing a modest increase in the previous month.

The German economy ministry said in a statement “industrial production has lost momentum, however, the good order situation and the positive mood among companies suggest that the industry will remain on an upward trend.” 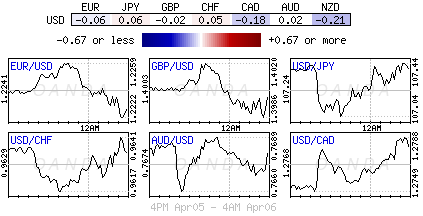