FOREX: An exchange of war words between the two nuclear-armed powers, the US and Russia yesterday regarding strikes in Syria continued to weigh on the dollar during early European afternoon despite the FOMC minutes from the March meeting embracing a positive outlook on the economy. Still, comments by the Kremlin today, supporting that further tensions in Syria should be avoided, eased somewhat the risk-off sentiment. The dollar index rose to 89.77 but remained near two-week lows (+0.23%), while dollar/yen climbed to 106.94 (+0.14%). Euro/dollar inched down to 1.2339 (-0.20%) ahead of the ECB meeting minutes due later today, pressured by worse-than-expected industrial figures out of the Eurozone, which slowed down for the third consecutive month, reaching the lowest yearly growth since August 2017. Pound/dollar was also on the backfoot, changing hands lower at 1.4147 (-0.22%) despite the UK Brexit Minister saying that the financial sector will face fewer job losses after the exit from the EU than previously thought. Aussie/dollar retreated further to 0.7742 (-0.14%) in contrast to its cousin kiwi/dollar which moved higher to 0.7373 (+0.24%) after RBNZ assistant governor John McDermott expressed on Thursday that the addition of the employment goal to the RBNZ’s mandate reinforces inflation flexibility. Dollar/loonie climbed to 1.2606 (+0.22%). Swedish krona tumbled after CPI readings out of Sweden missed forecasts, with dollar/krona surging to a one-week high of 8.4097 (+0.97%).

STOCKS: European equities opened weaker on Thursday as risk aversion persisted given rising concerns over a war in the Middle-East and the hawkish tone of the FOMC meeting minutes. The pan-European STOXX 600 and the blue-chip Euro STOXX 50 were down by 0.09% and 0.20% respectively at 0830 GMT, with all sectors being in the red except financials, energy and utilities. The German DAX 30 declined by 0.13%, the French CAC 40 fell by 0.16% and the British FTSE 100 inched down by 0.03%. The Italian FTSE MIB, though, managed to jump by 0.31% after news that Playtech, a gambling software developing company, agreed to buy the Italian betting firm Snaitech. Asian stocks closed mixed, while indices tracking US stock futures were in the red, pointing to a negative open.

COMMODITIES: Oil paused yesterday’s rally which took prices to three-year highs, with WTI crude standing flat at $66.82 (+0.01%) per barrel and the London-based Brent slipping to $71.93 (-0.17%). Geopolitical risks, though, continued to underpin the market. Early today Saudi Arabian air forces reported that they had intercepted missiles in Riyadh fired by Yemen a day after Trump warned to take military actions against the Syrian government which is backed by Russia and Iran. 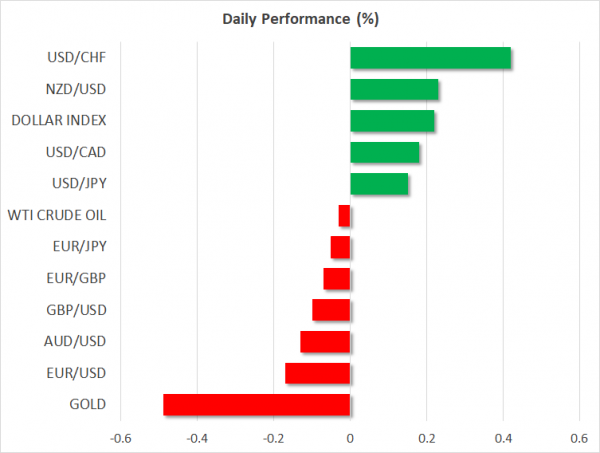 The main economic event later today will be the release of the European Central Bank (ECB) monetary policy accounts from the March 7-8 meeting (1130 GMT). At that meeting, the central bank kept its monetary strategy unchanged as was widely anticipated but dropped out of the statement its easing bias that officials stand ready to increase QE in terms of size and duration if the outlook becomes less favorable. The central bank has already taken some steps to reduce record stimulus by lowering the amount of monthly asset purchases, while recent headlines indicated that policymakers have shifted focus to interest rates as well, with ECB council member Ewald Nowotny saying a few days ago that the ECB could raise deposit rates by as much as 20bps when the rate hike process starts. However, an ECB spokesman played down this view afterwards. In forex markets, the euro could take a boost if the minutes prove hawkish, but if they disappoint the common currency could head lower.

Out of the US, initial jobless claims will come out at 1230 GMT and expectations are for the measure to drop to 231k in the week ending April 6 from 242k in the preceding week. Moreover, data on import and export prices for March will be published at the same time.

In Canada, investors will take a look at the new housing price index for the month of February at 1230 GMT.

As of today’s public appearances, ECB Executive Board member Benoit Coeure will be delivering remarks at 1215 GMT that will be closely monitored by investors after the release of meeting minutes. Comments by ECB Vice President Vitor Constancio and Bundesbank President Jens Weidman will follow at 1400 GMT.

Moreover, any developments on global trade can spur positioning in equity markets; China’s commerce ministry said today that trade talks would be impossible as Washington’s attempts at dialogue were not sincere.