Tuesday April 24: Five things the markets are talking about

U.S dollar bulls seem to have finally found some much needed support from interest rates as U.S bond yields climb toward levels unseen in nearly four-years.

The ‘mighty’ dollar recorded a three-month high yesterday as 10-year note traded atop of the psychological +3% at +2.998% – a key level that tech analysts believe keeps the door ajar for much higher yields.

On tap: For today, the market is expecting some more positive data – U.S consumer confidence and new home sales (10:00 am EDT).

In Japan, equities hit a two-month closing high overnight with financials leading the gains after U.S yields spiked to four-year highs and, as investors remained optimistic about upcoming earnings. The Nikkei advanced +0.86%, while the broader Topix ended +1.08% higher.

Down-under, Aussie shares rallied on Tuesday, driven by banks as benign inflation data backed expectations interest rates will remain accommodative for some time. However, gains are being capped by losses in materials on an extended slide in aluminum prices. The S&P/ASX 200 index ended up +0.6%. In S. Korea, the Kospi declined -0.4%, its third consecutive decline.

In Europe, regional indices are trading mostly higher across the board following a plethora os earnings reports – shares of SAP are helping the DAX. 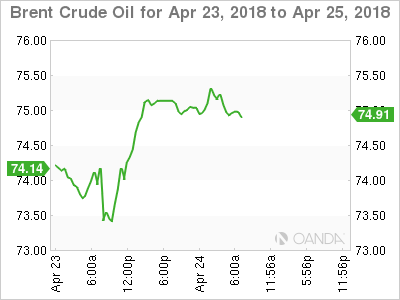 2. Brent hits highest in four-years as supplies tightens, gold up

Crude oil prices have rallied for a sixth day overnight to hit its highest price in four-years, supported by expectations that supplies will tighten just as demand reaches record levels.

Note: Brent’s six-day rising streak is the longest such string of gains since December, with prices up more than +20% from 2018-lows recorded in February.

Markets have been lifted by supply cuts led by the OPEC and the possibility of renewed U.S sanctions against Iran.

Note: The U.S has until May 12 to decide whether it will leave the Iran nuclear deal and re-impose sanctions against OPEC’s third-largest producer. 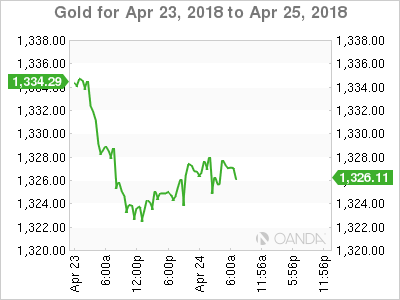 Elsewhere, sovereign yields have eased a tad ahead of the U.S open on profit taking.

The European Central Bank (ECB) guidance later this week (April 26), about the future of its stimulus programme, is the next thing that may cause some yield movement.

Last Friday, ECB’s Draghi said he was confident that the inflation outlook has picked up, but uncertainties “warrant patience, persistence and prudence.” 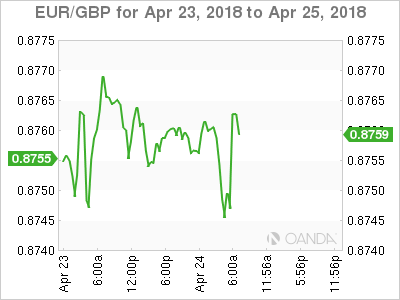 Recent commodity price have sparked fears of a stronger rise in inflation and, consequently, a faster rise in interest rates and it’s these higher yields that is supporting the ‘big’ dollar. 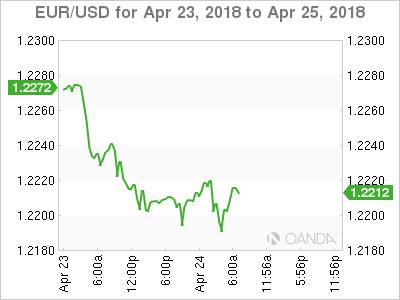 Euro data this morning showed that German business sentiment slipped further this month, as manufacturers cut back their business outlook.

The revamped German Ifo business climate index, which now also includes the service sector, fell to 102.1 points from 103.3 points in March, below market expectations of 102.6 points.

Note: It marks the fifth consecutive decline in the indicator.

The survey follows a string of soft economic data, pointing to a slowdown in economic activity in Q1.

Yesterday’s German PMI data surprised on the upside, as the downtrend in the PMI’s came to a halt this month. 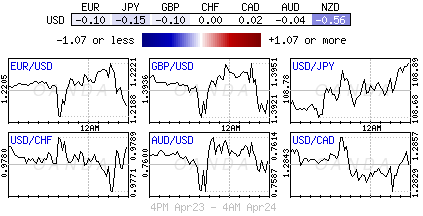