FOREX: The US dollar index was practically unchanged on Monday. On Friday, it pared back gains posted early in the session and closed the day almost flat as well, pressured by a similar pullback in US Treasury yields. That said, last week was still a very productive one for the dollar index overall, which rose 1.3% to reach its highest level in three-and-a-half months. Elsewhere, sterling plunged on Friday following disappointing GDP data, as investors scaled back expectations for a rate hike by the BoE next week.

STOCKS: US markets closed mixed on Friday, though the moves were not large in either direction. The Nasdaq Composite and the S&P 500 rose 0.16% and 0.11% respectively, while the Dow Jones fell by 0.05%. That said, risk sentiment appears to have improved as futures tracking the Dow, S&P, and Nasdaq 100 are all currently pointing to a higher open today. The shift may be owed to news suggesting tensions in Korean peninsula are set to ease further. Markets stayed closed in Japan and China today for public holidays, though the rest of Asia was a sea of green, possibly due to the same reason. In Hong Kong, the Hang Seng climbed by 1.63%. In Europe, futures tracking most of the major indices are flashing green today, with the only exception being France’s CAC 40.

COMMODITIES: Oil prices are a little lower on Monday, with WTI and Brent crude declining by 0.4% and 0.6% respectively. The latest pullback appears to be a result of resurging worries regarding the soaring US production, following another rise in the Baker Hughes oil rig count on Friday. That said, continued speculation that a chunk of Iranian oil supply will soon be removed from the market likely helped to limit any greater declines. In precious metals, gold is 0.25% lower today, last seen near the $1317 per ounce handle. The yellow metal has been underperforming lately, as a cocktail of encouraging headlines around North Korea and a recovering greenback appear to be weighing on demand. 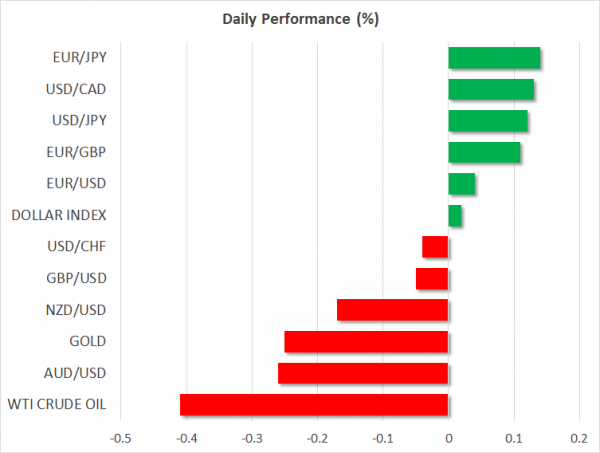 The British pound unexpectedly stole the show on Friday, plunging versus its major counterparts following a worse-than-expected slowdown in the GDP print for Q1. Economic growth slowed to 0.1% quarter-on-quarter from 0.4% previously, far below the forecast for 0.3%. Even more worrisome than the slowdown itself was that the UK statistics office noted the softness was not owed to transitory factors but rather to more persistent phenomena, highlighting that extreme weather in Q1 had only a “relatively small” impact.

The disappointing figures send the probability for a May rate hike by the Bank of England (BoE) even lower to a mere 20%, from roughly 50% previously, as investors bet that Carney and Co will not dare pull the rate-hike trigger in the face of a slowing economy. Indeed, the Bank now appears highly unlikely to hike in May, and if the probability for such action continues to drift towards 0% in the coming days, then the pound could remain under pressure. As always, besides the BoE, the other key determinant for sterling will be any updates on Brexit, where the next negotiating round will begin on Wednesday.

The dollar index is nearly unchanged today. While it surged early on Friday, it pared the gains it posted heading into the close, most likely due to investors taking some profit on their prior long-dollar positions following a very strong week overall. This week, volatility in the greenback is set to remain elevated, amid a flurry of key US data releases including an employment report on Friday, as well as a Fed policy decision on Wednesday.

On the geopolitical front, North Korean leader Kim Jong Un said he plans to invite international experts and journalists when his country shuts its nuclear test site in May. This follows his recent pledge to work towards a complete denuclearization of the Korean peninsula. These comments are likely aimed at displaying the North’s commitment to its promise, amid skepticism from much of the international community as to whether such pledges will really materialize. For now, geopolitical risk premium appears to be on the decline, a factor that is evidently helping Asian stock indices to rally and keeping safe havens such as the yen and gold on the back foot. 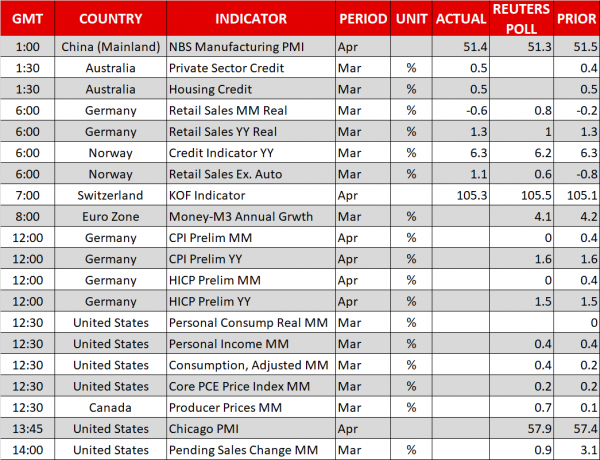 Day ahead: German inflation, with core PCE & consumption data due out of the US

Monday’s calendar features the release of inflation figures out of the Germany and the US. In the case of the latter, those would pertain to core PCE price data – the Federal Reserve’s preferred inflation gauge. The world’s largest economy will also be on the receiving end of data on personal income and consumption.

At 0800 GMT, the ECB will be releasing data on lending and money supply for the month of March.

Later (1200 GMT), the attention will turn to preliminary inflation figures for the month of April out of Germany. The CPI is anticipated to ease on a monthly basis – exhibiting zero growth – and expand at the same 1.6% rate on a yearly basis. The Harmonised Index of Consumer Prices (HICP), that uses a common methodology across EU countries, will also be monitored and is expected to show a similar pattern to CPI.

The core PCE price index, as well as personal income and consumption figures, all for March will be published at 1230 GMT out of the US. Most interest may fall on the core PCE index, especially in light of the upcoming FOMC decision on interest rates on Wednesday. Analysts’ projections point to accelerating price pressures, with the index forecast to rise by 1.9% in yearly terms from 1.6% in February; the Fed’s target for annual inflation is 2.0%. Expectations for other releases are also largely encouraging and may push market participants to price in an even more aggressive Fed in terms of policy tightening. At the moment and according to Fed funds futures, two more quarter percentage point hikes are priced in during 2018, while markets see a 20% chance for a third one as well, something which if it were to materialize, would bring the total for the year to four. Other US data due later in the day include April’s Chicago PMI (1345 GMT) and pending home sales for March (1400 GMT).

Canadian producer prices for March will be made public at the same time the US sees the release of core PCE price data (1230 GMT).

Fast-food chain McDonald’s is among companies releasing quarterly results today; the company’s report is scheduled for release before the opening bell on Wall Street. 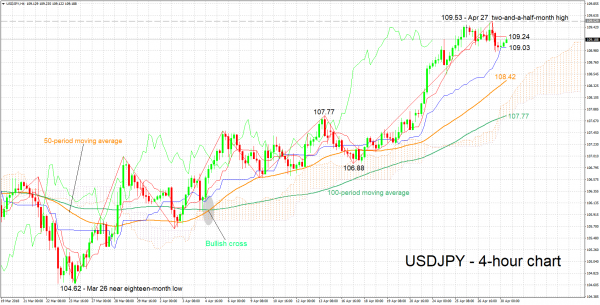 USDJPY has retreated a bit after hitting a two-and-a-half-month high of 109.53 on Friday, though it remains at elevated levels relative to a few weeks ago. The Tenkan- and Kijun-sen lines are positively aligned, supporting a bullish picture in the short-term. Notice that the two lines have flatlined though, this being a sign of weakening positive momentum.

Better-than-expected US data later on Monday are likely to push the pair higher. Immediate resistance may be taking place around the Tenkan-sen at 109.24. A break above would turn the attention to last week’s high of 109.53 and in case of stronger bullish movement to the 110 round figure which may hold psychological significance.

Conversely, weaker-than-anticipated US figures might exert selling pressure in USDJPY. Support in case of declines could come around the Kijun-sen at 109.03 – the area around this includes the 109 handle – and further below from the range around the current level of the 50-day moving average at 108.42.