The US Bureau of Economic Analysis will publish its latest monthly release on personal income and outlays on Thursday at 12:30 GMT. The report will contain closely watched data on personal income and consumption, as well as the PCE measure of inflation. With market fears of a major inflation overshoot having abated recently, Thursday’s figures will likely confirm the continuation of the goldilocks economy, with US personal incomes and spending rising solidly, but price pressures remaining moderate.

Personal income is expected to rise by 0.3% month-on-month in April, the same pace as in March and maintaining positive growth for the 10th straight month. Personal consumption is forecast to grow by 0.4% m/m, also the same rate as in the prior period. If the numbers come in line with expectations, it would point to a descent start to the second quarter. Consumption comprises about 70% of the US economy and given that the personal income and spending data are components of GDP calculations, they are considered to be a strong indicator to GDP growth. 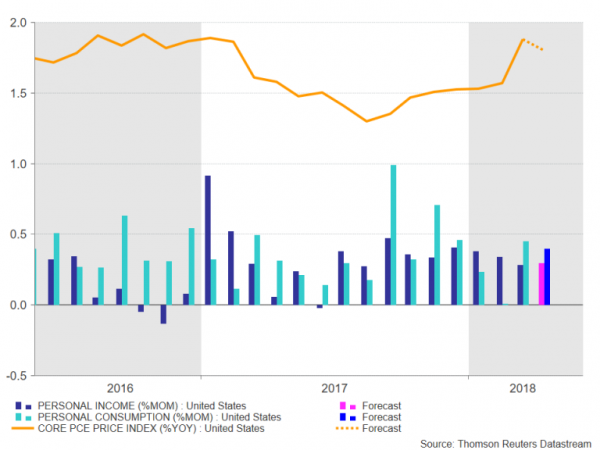 The US economy expanded by an annualized rate of 2.2% in the first quarter of 2018, down from the prior quarter’s 2.9% rate but still among the fastest in advanced economies. A surprisingly weak consumption figure on Thursday would raise doubts about growth rebounding in the second quarter.

The focal point of the report however, will be inflation as measured by personal consumption expenditures (PCE) prices, as the Fed pays closer attention to the PCE price gauge than the alternative consumer price index. In March, the PCE price index hit 2% year-on-year for the first time since February 2017, while the core PCE price index, which excludes food and energy prices and is the Fed’s primary inflation targeting indicator, picked up to 1.9%. Core PCE is forecast to slip back slightly in April to 1.8% y/y.

The index has remained below the Fed’s 2% objective since May 2012, but should there be an upside surprise and core PCE reaches the Fed’s target, dollar/yen could get a substantial lift after the sharp sell-off over the past week. The pair could jump above the 110 handle and above its 200-day moving average if the data suggested the Fed may need to raise rates three more times this year. Above the 110 level, there would likely be some resistance from the region around 110.45. A break above this area would clear the way for the 111 level. A bigger-than-expected increase in both personal consumption and core PCE would be the most bullish outcome for the dollar.

Should the data disappoint however, or broadly meet expectations, it would reinforce the view that the Fed will maintain its gradual rate hike path, and market sentiment will continue to be the main driver for dollar/yen in the short term, at least until Friday’s nonfarm payrolls report. The worst-case scenario would be a miss in the core PCE figure and/or a very poor personal spending number, which would exasperate dollar/yen’s recent losses. The pair could breach the tested support at the 50-day moving average, currently around 108.25, and open the way towards a key congestion area around 107.75.