GBPUSD came under renewed selling pressure on Monday after three consecutive bullish days, but before the negative movement, it had jumped above the 1.3400 handle. Also, the price found strong resistance obstacle near the mid-level of the Bollinger Band (20-day simple moving average). The short-term technical indicators are neutral and point to a more weakness in the market.

Momentum indicators, in the daily timeframe, are pointing to a neutral to a negative bias in the short term with the RSI just above the 30 level and the stochastic oscillator holding in neutral territory. However, the %K line of the stochastic is attempting a bearish cross with the %D line, suggesting a downside resumption is nearing.

Further losses should see the price coming into contact with the 50.0% Fibonacci retracement level around 1.3240 of the upleg from 1.2100 to 1.4375 before hitting the May 29 low of the 1.3200 handle, which is acting as a major support. A drop below this region would reinforce the bearish structure in the medium term and open the way towards the next key support level of 1.3040.

In the event of an upside retracement, the 1.3450 level could act as a barrier before being able to retest the 38.2% Fibonacci. A break above this level would shift the medium-term outlook to a more neutral one as it would take the pair towards the upper Bollinger Band, which coincides with the 1.3600 psychological level.

It is worth mentioning that GBPUSD is looking more bearish over the last couple of months as the pullback on the 1.4375 resistance level has pushed the price further down. 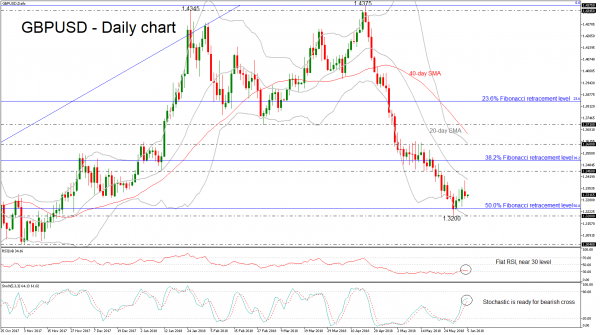