Gold prices have been developing within a sideways channel over the last ten days with upper boundary the 1217 resistance level, and lower boundary the 1204 support level. It is worth mentioning that the price recorded a fresh 17-month low of 1203.55 earlier on Monday. The technical structure enhances the argument that the outlook is entirely negative at the moment.

Looking at momentum oscillators in the 4-hour chart, they suggest further declines may be on the cards in the short-term. The RSI is approaching the threshold of 30 with strong momentum, while the MACD oscillator plunged below its trigger line in the negative zone.

In case of further declines in the price, immediate support may be found near the psychological level of 1200. A downside break of that zone would open the way for the January 2017 bottom of 1180.

On the flip side, if the bulls take control, price advances may stall initially near the latest highs at 1217. A potential upside violation of this level would also coincide with a break of the consolidation area, raising the likelihood for more upside movements. In such a case, the 1220 and then the 23.6% Fibonacci of the downleg from 1309 to 1204, near 1228.75 would be the next level for investors to have in mind.

To conclude, the precious metal has remained in a downside trend since June 14, following the bounce off the 1309 resistance hurdle. 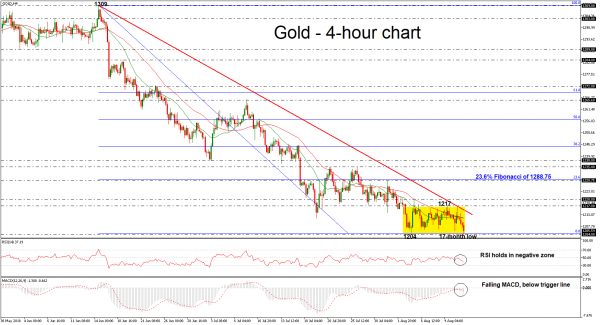