The US 30 index (Dow Jones Industrial Average) touched a fresh six-month high of 26,147.50 during Tuesday’s trading, while it is currently trading not far below this peak.

The RSI is comfortably in bullish territory above 50, though it has eased somewhat, pointing to weakening positive momentum in the short-term. Additionally, notice that the indicator is marginally above the 70 overbought level.

A drop in the index could meet support around the 26,000 handle which may carry psychological significance. Steeper losses would turn the attention to the region around the middle Bollinger line – a 20-day moving average line – at 25,611.82.

On the upside, resistance may come around the upper Bollinger band at 26,129.76, with the area around this also encapsulating yesterday’s six-month high of 26,147.50. A break above would increasingly bring into scope late January’s record-high of 26,701.90. Before that, numerous round figures such as 26,200 and 26,300 could provide some resistance.

In terms of the medium-term picture, it is bullish with trading activity taking place above both the 50- and 100-day MA lines.

Overall, the short-term bias is positive, but momentum appears to have weakened; there are some signs for an overextended rally as well. The medium-term outlook is also bullish. An appreciation by less than 2.5% from current levels would allow the index to post fresh all-time highs. The other two major US benchmarks, the S&P 500 and the Nasdaq Composite, have been lately posting record-highs. 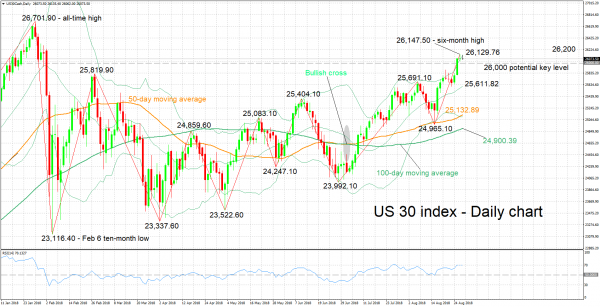