A three-week ascending channel has guided the Canadian Dollar higher against the Japanese Yen. The exchange rate bounced off the bottom border of the channel on September 9 and had since reached ten months high level at 89.00.

The currency pair is trading near a resistance cluster formed by the combination of the weekly and the monthly PPs at 89.55 during the morning hours of Tuesday’s session. From a theoretical point, this could provide a significant resistance level for the rate and push the pair towards the weekly pivot point at 87.47.

However, if this resistance cluster is unable to hold, the next target for the CAD/JPY currency exchange rate will be at the upper boundary of a long-term ascending channel near 90.00. 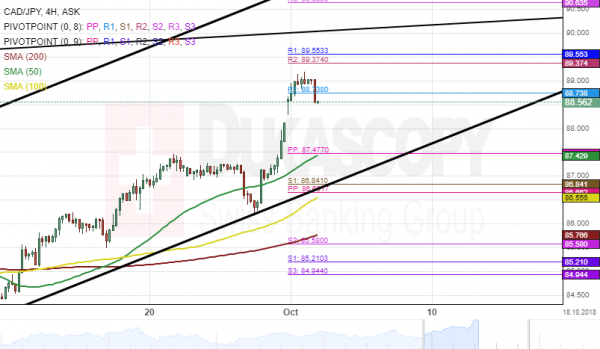 USD/CAD Pulled Back From 17-Year Highs Last Week, But Bulls Remain In Control