USDJPY reached a new 11-month high of 114.54 early on Thursday after the bullish rally yesterday, creating a new higher high in the medium-term structure. However, it started today’s session with negative momentum. The pair is trading above the ascending trend line and well above the 20- and 40-simple moving averages (SMAs), suggesting further significant gains.

In the daily timeframe, technical indicators show some signs that today’s pullback may continue for a while longer. The RSI turned lower after it hit resistance in the overbought zone, while the red %K line of the stochastic oscillator recorded a bearish cross with the blue %D line, showing signs of peaking as well.

If the bulls manage to take charge for another session, then the expectation is for a retest of the 114.70 resistance level, achieved on November 2017. If there is a clear break above this barrier, then there are chances for larger extensions. Such a break would confirm bullish movement until the 155.50, identified by the high on March 2017.

On the flip side, a clear dip below the 113.15 support level would bring the pair towards the 20-SMA near 112.60 and may set the stage for declines until the 111.75 support, which overlaps with the 40-SMA and stands near the diagonal line. A penetration of this significant obstacle would shift the bullish outlook to a more neutral one.

Overall, USDJPY has been developing within an uptrend since March 26 but there are some signs for a possible bearish correction, probably retesting the rising line. 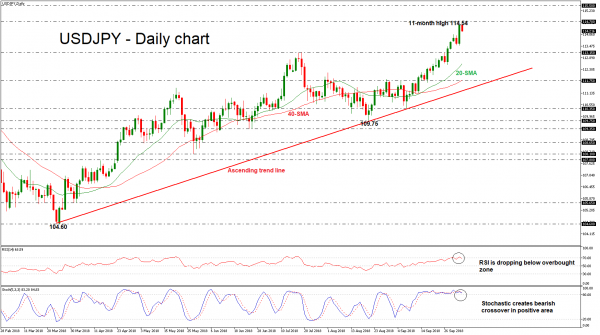 Euro Back Near July Highs