AUDUSD lost around 1.20% on Wednesday, printing its biggest daily loss since June 14. On Thursday, the bearish mood turned stronger, driving the pair towards a 32-month low of 0.7075, with the technical indicators suggesting that a rebound is around the corner. Still, bearish signals have not fully faded yet.

According to the RSI, the downfall could come to an end in the short-term as the index is set to cross below its 30 oversold threshold, a view supported by the Stochastic oscillator as well given that the green %K line is currently fluctuating around the red %D line below 20. However, looking at the candles, the market has yet to touch the lower Bollinger band, a sign that bearish forces might persist before things get better.

Additional losses could drive the price towards the 0.7000 round level, while if this support fails to hold, the next stop could be at 0.6900. Even lower, bears would try to break the 0.6826 bottom marked on January 2016.

Alternatively, if the price manages to reverse higher, immediate resistance could come at the 0.7100 psychological level before bulls eye the 20-day simple moving average around 0.7190 which is also the middle Bollinger band. Slightly higher, the 50-day MA currently around 0.7264 may halt bullish actions, while in case the price crawls above that level too, attention would turn to the upper Bollinger band at 0.7310 .

In the medium-term picture, the bearish outlook strengthened even further on Thursday after the price broke the previous low of 0.7084, resuming the long-term donwleg that started at the end of January. The negative picture could stay in place as long as the 50-day MA continues to distance itself below the 200-day MA. 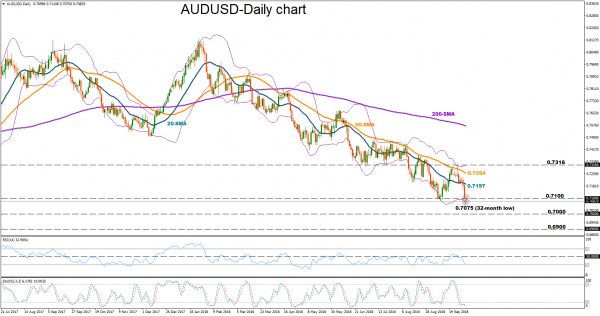 Financial Market Participants Are Focused On The Chinese Coronavirus. We Expect The Bank Of Canada Meeting