Short term S&P 500 (SPX) Elliott wave view suggests that the selloff starting from Sept 21 high (2940.9) has ended at Oct 29 low (2603.54). We take the most aggressive view and call the low at 2603.54 as wave IV in Cycle degree. This suggests that SPX is ready to rally in a new bullish cycle towards a new all time high. However, for this view to gain validity, the Index must first break above the previous all-time high, labelled as Cycle degree wave III at 2940.9. Without this confirmation, the Index technically can just correct the selloff from last month in 3 waves ABC zigzag, then continue the selloff again.

Looking at the internal subdivision, it appears the selloff from Sept 21 to Oct 29 low took the form of a double three Elliott Wave structure. Down from 2940.9 high, Primary degree wave ((W)) ended at 2710.5, wave ((X)) ended at 2816.94, and wave ((Y)) ended at 2603.54. This move lower also ended a higher Cycle degree wave IV. Since then, the Index has rallied strongly, further getting acceleration to the upside after U.S. midterm election. 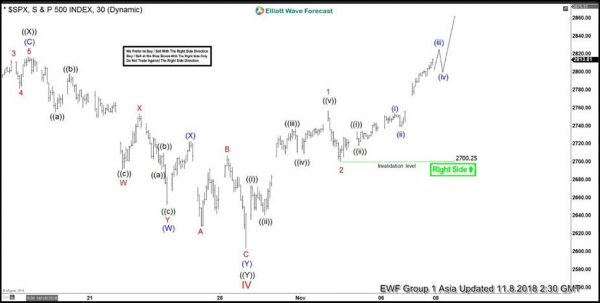