The dow jones index is trading in a downtrend on an intra-day time frame (8-hour time frame). As per our report yesterday, the price touched both the dovish and hawkish levels. At the open, the price rallied and kissed the level of 2400 but then it retraced and made a low of 2304 just shy of our target which is at 2,2947.

The downtrend is confirmed by the orange trend line and as long as the price stays below this line, the downtrend would remain intact. The further confirmation of the downtrend comes from the fact that the price is trading below the 50 and 100-day moving averages (shown in yellow and green).

The RSI is trading near an oversold zone and this means that the bulls may just step in and we may see a small correction. 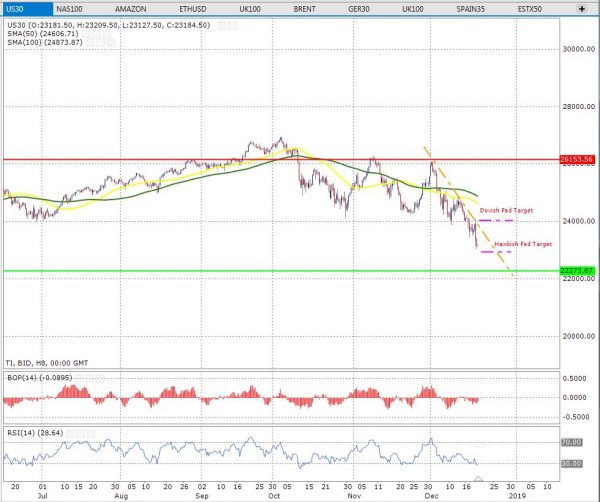 The FTSE 100 index is has broken out of its consolidation zone on an intraday time frame (8-hour time frame). Fortunately for the bears, the break out is to the downside and this confirms that the bears are in strong control of the price. Having said this the price is trading really close to its major support zone and at the same time, we also have an oversold signal coming from the RSI. Combined together, this sends a powerful message for the bulls that there may be an opportunity here. However, if the price breaks the current support zone, it will confirm more weakness and it is likely that the may continue its move towards the next major support which is at 6500.