EURNZD has come close to breaking the 40-day simple moving average (SMA) today, moving towards the 1.6690 support level again. The MACD oscillator is consolidating below the zero and trigger lines keeping its momentum flat, while the %K line of the stochastic oscillator recorded a bearish crossover with the %D line, approaching the negative zone.

On the other side, a bounce off the 40-day SMA could drive prices higher towards the 20-day SMA currently at the 1.6900 handle. Slightly above this line could send prices until 1.6940. Further upside pressure may meet again the 23.6% Fibonacci of 1.7125.

To sum up, the market is expected to hold neutral in very short-term and bearish in the medium-term. A significant decline below December’s low could endorse the negative outlook in long term as well. 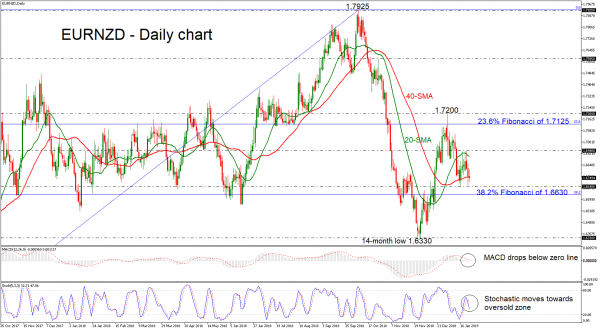