This past week, the Euro declined sharply from the 0.8800 resistance zone against the British Pound. The EUR/GBP pair even broke the 0.8700 support before buyers appeared above the 0.8600 support. 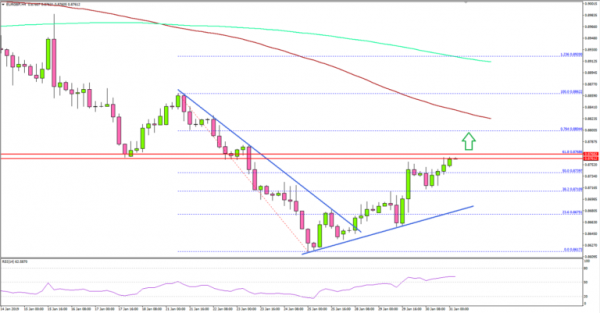 Looking at the 4-hours chart, the pair traded as low as 0.8617 and later formed a solid support near 0.8620. As a result, the pair started a decent recovery and moved above the 0.8650 resistance.

The pair broke the 38.2% Fib retracement level of the recent drop from the 0.8862 high to 0.8617 low. Moreover, there was a break above a crucial bearish trend line with resistance at 0.8660. It opened the doors for more gains and the pair traded above the 0.8700 resistance.

However, the pair struggled to hold gains above the 0.8750 level and the 50% Fib retracement level of the recent drop from the 0.8862 high to 0.8617 low. Therefore, there could be a couple of swing moves, but the pair is likely to remain supported near 0.8680.

On the upside, buyers need to surpass the 0.8770-80 resistance area in a convincing manner. If they continue to struggle, there could be a bearish reaction below the 0.8680 and 0.8650 support levels.

Fundamentally, the Euro Zone Economic Confidence Index for Jan 2019 was released by the European Commission. The market was looking for a drop in the index from the last reading of 107.3 to 106.8.

The actual result was lower than the forecast as the Euro Zone Economic Confidence Index declined to 106.2. On the positive side, the last reading was revised up from 107.3 to 107.4. More importantly, the Business climate indicator declined from the last revised reading of 0.86 to 0.69.

Overall, both EUR/USD and EUR/GBP were under pressure after the release, but they both are trading above key support levels.