The pair hit new ten-week high at 110.65 in early Tuesday’s trading, in extension of Monday’s rally that eventually closed above pivotal 110.00/22 barriers and generated bullish signal. The dollar benefited on increased safe-haven demand over uncertainty on US/China trade talks, though, some optimistic tones were heard on Monday, boosting hopes that two countries would find a deal before 1 Mar deadline. Bulls were additionally supported by weaker than expected Japanese data, released overnight) and pressure barriers at 110.71/78 (55DMA/100WMA) break of which would generate fresh bullish signal and may trigger extension towards 111.26 (200SMA). On the other side, flat momentum and stochastic heading into overbought territory on daily chart, warn that bulls may run out of steam. Broken pivotal barriers at 110.26/00 zone now mark solid support and expected to keep the downside protected. Only return and close below converged ascending 10/20SMA’s (109.76/60) would sideline bulls. Traders will be looking for further signals from the speech of Fed chief Powell, due later today. 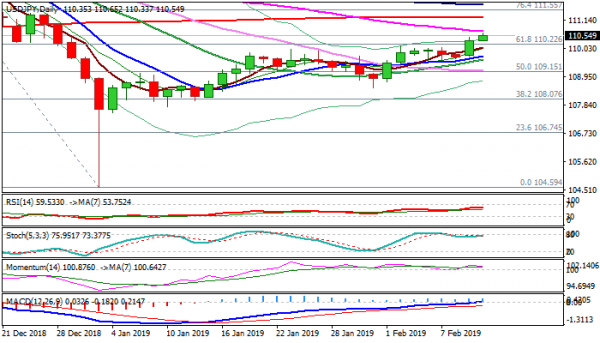