EURGBP is having a volatile week, with the price spiking to a two-week high of 0.8675 on Monday and then falling sharply to a 23-month low of 0.8470 on Wednesday. The short-term risk could be currently viewed as neutral-to bearish as the RSI continues to slide sideways below 50 and the MACD is reversing south to meet its red signal line. The flat Tenkan-sen and the falling blue-Kijun sen lines also indicate the lack of positive signs.

The price could retest the 0.8470 bottom if negative momentum resumes. Beating that level, the pair could turn even more bearish in the bigger picture, with the price heading lower to meet the 0.8400 psychological level. Investors could also pay attention to the 0.8330 area which has been quite restrictive during 2016-2017.

Alternatively, a close above 0.8540 could send the price up to the 0.8616-0.8655 area taken from the lows on January 25 and November 13 respectively. Slightly higher, the door could open for the 0.8690 barrier while further improvement may see resistance coming from the 50-day MA currently at 0.8726.

Summing up, EURGBP could post a neutral-to-bearish performance in the short-term, while in eh medium-term, the steeper negative slope in the 50-day MA indicates that the bearish outlook is not likely to change anytime soon. 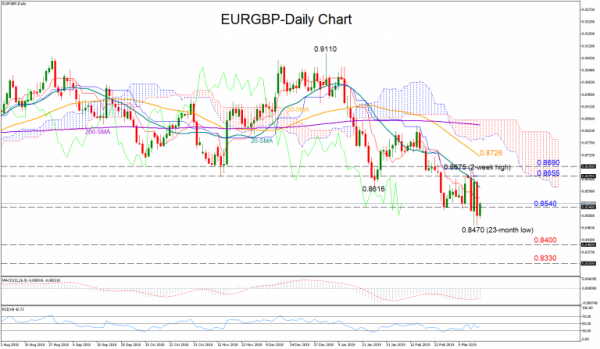