UK 100 stock index (FTSE 100) has advanced considerably after touching the 38.2% Fibonacci retracement level of the downleg from 7900 to 6533, around 7060. During Tuesday’s session the price gained some more ground driving the market towards a fresh five-month high of 7350. The flatly aligned Tenkan- and Kijun-sen lines are indicative of a possible weaker momentum than before. However, the MACD oscillator is heading north.

If the price manages more bullish actions and surpasses the five-month high, immediate resistance would come from the 61.8% Fibonacci level, around 7380. Further up, the index could rest around the 7560 resistance, identified by the high on September 2017.

On the other hand, in case of bearish structure the market might revisit the 7265 support, which stands near the 50.0% Fibonacci region around 7220. More declines could meet the 40-day simple moving average (SMA) around the 38.2% Fibonacci of 7060.

Overall, the downfall from 7900 is still active and hence the outlook remains negative despite the short-term upward rally. A jump above the 61.8% Fibonacci could confirm the near-term bullish tendency. 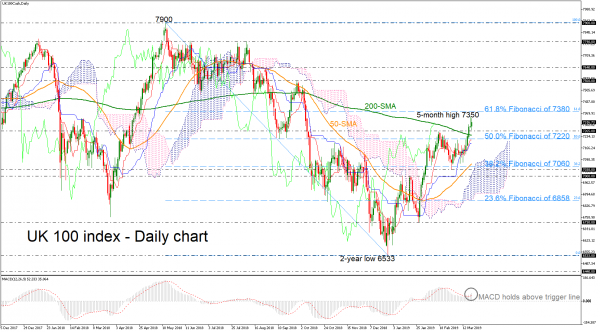