EURGBP has been steadily rising this month, piercing its short-term simple moving averages (SMA) and the Ichimoku cloud. The bias is still positive as the red Tenkan-sen is trending northward and above the blue Kijun-sen, while the MACD is increasing strength above its red signal line. The RSI is also fluctuating in bullish zone (above 50),though with weaker momentum, suggesting that some softness is possible.

Next resistance to upside movements could emerge between 0.8700 and 0.8720. A descent rally above the 0.8765 level and the top of the Ichimoku cloud, however, could be more persuasive to the buyers, while a break above the 200-day SMA (0.8811) may confirm further bullish action.

Moving lower, the 0.8648-0.8615 region could halt downside corrections before the market hits a floor around 0.8500. In case the latter proves a weak obstacle, all eyes will turn to the 0.8470 trough which if broken could then open the door for the 0.8400 psychological mark, last seen in April 2017.

In the medium-term picture, the market is still in bearish correction mode since the start of the year, with the falling 50-day SMA giving little hope for an outlook reversal. 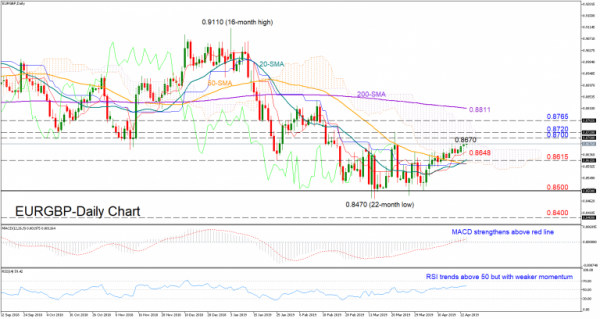