BTCUSD is testing a new 15-month peak of 11,427, creating a strong bullish rally over the last three weeks. While the slowdown in the red Tenkan-sen and the blue Kijun-sen lines could be a warning sign that the bullish action may soon fade, the market could chart another rally if the MACD continues to trend higher and rises above its red signal line. The RSI is hovering in the overbought zone as well.

If there’s a cross above today’s high, nearby resistance could be detected around 11,660 taken from the peak on March 2018. Should the market beat this area too, the door would open for the 11,865 resistance level.

On the flipside, if bitcoin returns lower, it could touch the red-Tenkan-sen line around 10,966 while a decisive close below this level could be followed by additional losses towards the 23.6% Fibonacci retracement level of the upleg from 7,410 to 11,427. Even lower attention shifts to the 20-simple moving average (SMA) currently at 10,273 in the 4-hour chart.

Summarizing, BTCUSD is looking cautiously positive in the short-term and bullish in the medium-term. 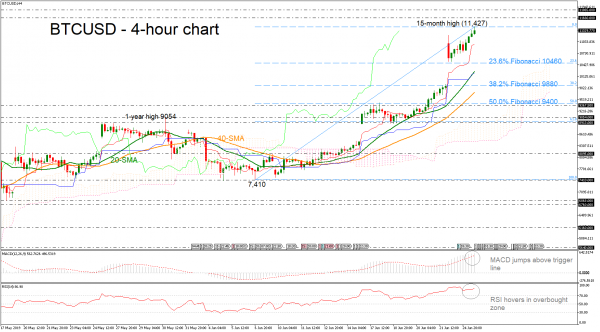