WTI Crude oil prices posted declines early on Friday. The declines came on investor concerns about slowing demand. The futures markets saw crude oil falling 1.1% while Brent futures were down 0.1%, extending declines from the day before. The declines come after OPEC and Russia agreed to extend the current production cuts for the next six to nine months.

Following the recent declines off the highs near the 60.00 handle, oil prices have been consolidating sideways. This has led to a bearish flag pattern being formed just below the resistance area of 57.50. A breakdown below the previous lows of 56.25 could confirm the downside bias. This will validate the bearish flag pattern which puts the downside target to 54.42 where support level exists. 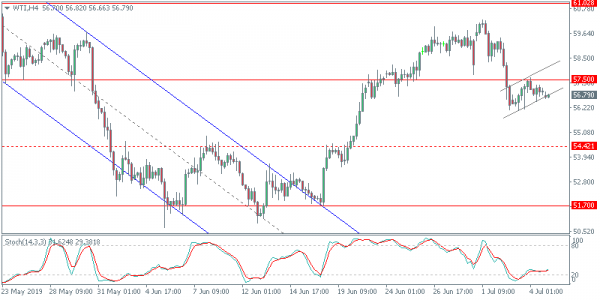