EURNZD has been declining considerably since yesterday, after the bounce off the 23.6% Fibonacci retracement level of the upward rally from the 18-month low of 1.6285 to the eight-month high of 1.7305 near 1.7050. The pair is ready to touch the 200-day simple moving average (SMA) and a possible upside correction is expected in the short-term.

From the technical point of view, the RSI is sloping down below the 50 level, confirming the recent momentum on price, while the stochastic oscillator found strong resistance at the 80 level and fell aggressively.

Alternatively, a successful climb above the 38.2% Fibo of the downleg at 1.6915 would drive the pair until the 1.7050 resistance near the short-term moving averages. More advances could hit the 50.0% Fibo of the downfall near 1.7110.

In brief, EURNZD is in a sell-off mode between the short-term and the long-term SMAs. A slip beneath the 200-SMA could open the door for more declines, shifting the bias to neutral, while a run above 1.7300 could rekindle the medium-term buying interest. 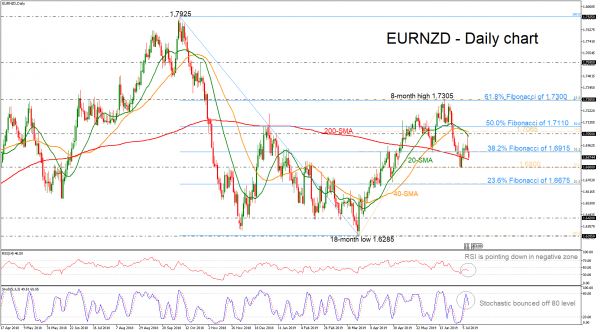