CADJPY is hovering near the 50.0% Fibonacci retracement level of the downleg from 89.25 to 76.60. After the rebound on the two-year low of 76.60, the pair has been lacking direction, confirmed by the technical indicators. The RSI is flattening in the positive area, while the MACD is moving sideways near the trigger line.

An advance above the 50.0% Fibonacci of 82.90 and the 83.25 resistance could open the door for bullish actions until the 61.8% Fibonacci region, which overlaps with the 84.40 resistance level, registered on April 17.

Concluding, a break above the 61.8% Fibo of 84.40 in the near term could change the bearish outlook to bullish. However, in case of a pullback below the 23.6% Fibonacci, this could confirm the long-term negative momentum. 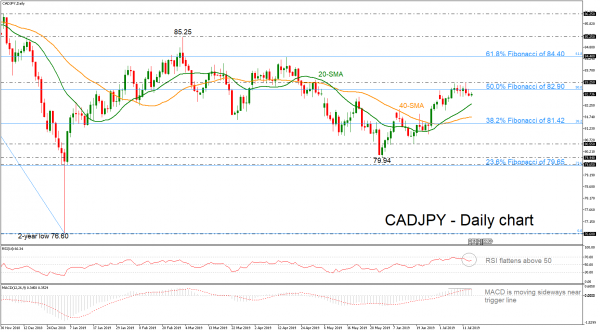