EURCHF continued southbound from a 6-month high of 1.1475 on April 23, breaking out of an 8-month period sideways move to push towards a 23-month low of 1.1055. Presently, sellers are fracturing the support trying to continue the bearish bias.

The 14-day simple moving average (SMA) is beginning a bearish cross of the 21-day SMA, whereas the long-term SMAs coincide with the down move. The MACD has crossed below the trigger line and the RSI approaches the 30 level, both in negative areas. The ADX is showing a weak trend now.

For a negative scenario, the sellers would need to continue the momentum to close below the 1.1055 level and propel the price to test the support of 1.0993. A successful fracture would thrust the pair further down to the 25-month low of 1.0831.

Summarizing, the bearish bias seems to be outweighing any present evaporated bullish outlook. 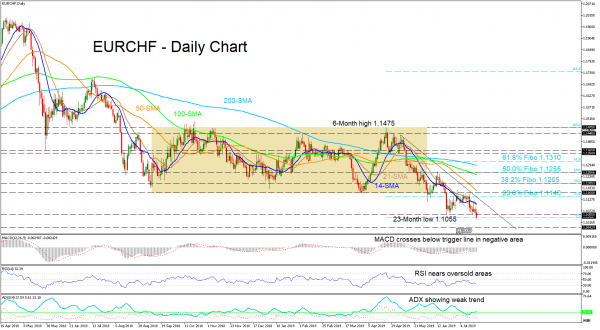