EURAUD descended from a five-and-a-half-month high of 1.6447, over a one-month period, to break through a double obstacle of the 200-day simple moving average (SMA) and the uptrend line from Feb 2017. Price stalled just below the 1.5900 psychological level, where buyers have come on board to try and move back north.

The price has crossed downwards through the Ichimoku cloud and all simple moving averages. The 50- and 100-day (SMAs), although above the 200-SMA, have started to turn down, indicating possible negative sentiment could continue. The MACD and RSI are in negative areas concurring a downwards direction. The ADX indicates a strong trend.

Downside induced movement would require the 200-SMA and trendline to push the price past the initial support 1.5895 to encounter the next support of 1.5805, and if surpassed, the 4-month low of 1.5682 could unfold.

Overall the medium- and long-term trend remains bullish, but if the short-term trend were to show determination and push past the 1.5682 low, a bearish bias would take over. 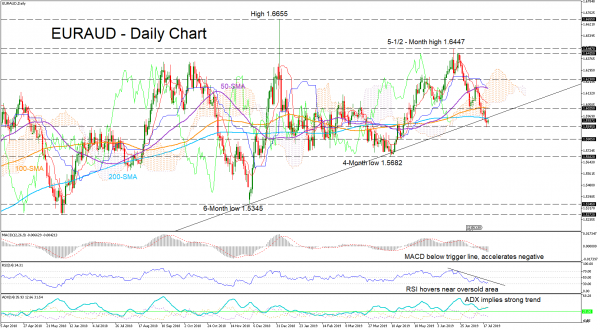