The MACD in the four-hour chart has gained some strength above its red signal line, endorsing the current upside movement in the price, though the indicator is still close to zero, while the red Tenkan-sen remains flat around the blue Kijun-sen, both giving little hopes for a meaningful rally.

The bulls need a decisive close above 0.6820 to approach resistance around 0.6864. Once the price overcomes the 200-period simple moving average, it might face a taller wall at 0.6910, a break of which would switch the bigger picture from bearish to neutral.

In the event of a downside correction, the pair could initially retest the 0.6745 level at the bottom of the Ichimoku cloud. Should the border prove easy to get through this time, the sell-off could extend towards the 10 ½-year trough of 0.6676 registered earlier this month. Below the latter, the market could look for new troughs between 0.6550 and 0.6500, last visited in 2009.

In brief, AUDUSD is facing weak bullish signals in the short-term and the probability of a significant improvement in the market is low. 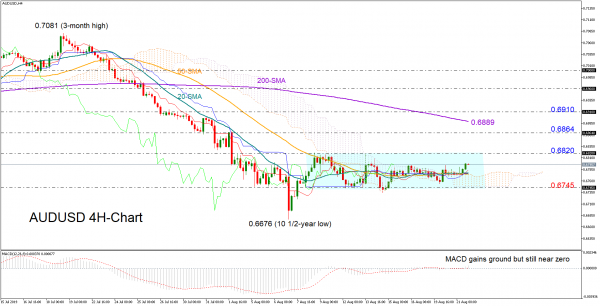