GBPJPY turned higher at a thirty-three-month low of 126.53 on August 12, of a three-month descending channel plotting higher highs and lows. Currently at the 130.00 level, the bears are trying for a push lower as reflected by the momentum indicators.

The RSI has deflected off the overbought level and is headed south, whilst the MACD has started to flatten above its red trigger line in the positive territory, both suggesting some weakening in positive momentum. In spite of this, the price is showing that a bullish picture could evolve as the 50-period simple moving average (SMA) is trying to complete a bullish cross of the 100-SMA.

Overall the bigger picture is bearish, but a close above the 135.65 level could turn the bias back to neutral. 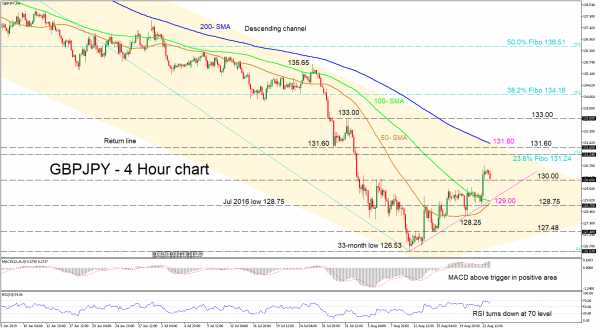