Copper futures for December delivery softened under a well-established support area of 2.5300 (since 2017), extending the downward pattern to a new two-year low of 2.4952.

Technically, the market could stay under pressure in the short-term as long as the MACD holds in negative area and under its red signal line, with the bearish RSI endorsing the view as well. Yet, the Stochastics’ bullish rebound in the oversold area suggests that upside corrections in the very short-term are possible.

Traders could wait for a decisive rally above the 2.6100 barrier to push buying orders higher, while a corrective move above the 50-day simple moving average (SMA) may probably see resistance crawling up to 2.700. Even higher, the next important barrier to watch could be the 200-day SMA, which if significantly violated could trigger a new wave of buying.

On the downside, sellers could re-challenge the 2.4952 trough. Clearing that bottom, the spotlight will shift straight to the 2017 low of 2.4690., while even lower the 2.4500 level could be of psychological importance.

In the three-month picture (medium-term), the bearish sentiment strengthened following the recent sell-off, with the 2.6100 level seen as a threshold for the market to return to neutrality.

Summarizing, copper futures continue to face downside risks both in the short- and the medium-term. 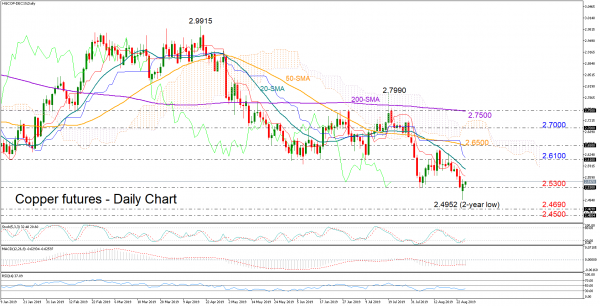 Copper Futures Fail to Close Below 2.54; Move Back Sideways