EURGBP registered losses for the fourth consecutive week and bearish signals became stronger as the price failed to return above the upward support line, crossing instead under its shorter-term simple moving averages (SMA) and the Ichimoku cloud.

The 50% Fibonacci of the upleg from 0.8470 to 0.9323 managed to confidently curb downside movements on Monday and although the Stochastics are currently preparing to exit the oversold territory, the short-term bias remains skewed to the downside as the MACD maintains negative momentum under its red signal line and the RSI shows no clear direction in the bearish area.

Meanwhile in the medium-term picture, the positive sentiment has weakened but not faded yet as the pair continues to trade above the 61.8% Fibonacci of 0.8796.

Summarizing, EURGBP is likely to remain under pressure in the short-term, though losses could be limited as the market looks to be trading near oversold levels. In the medium-term picture, a drop under 0.8796 would shift the outlook from bullish to neutral. 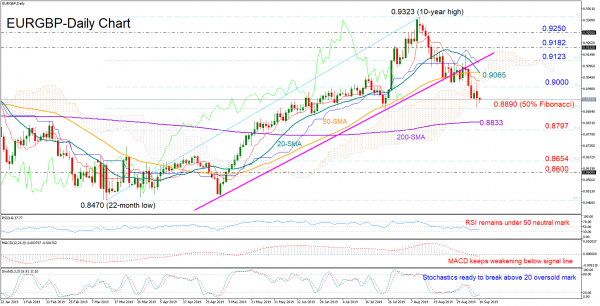