EURCAD descended over the last month from the peak of 1.4994, after failing to close above the 100-day simple moving average (SMA), with the bears eyeing the weekly uptrend line drawn from 1.2127 on the 12 of August 2012. They failed to penetrate below, only managing to produce a 2-year low of 1.4502 and reversed after finding support on the line.

The MACD has distanced itself from its red trigger line in the negative zone, reflecting an increase in bearish momentum, thus concurring with the downward sloping SMAs negative outlook. The RSI, on the other hand, warns of a possible pause in the bearish move, as it is flattening above the oversold region.

Overall, the short-term outlook remains bearish and a break below the trendline and the 1.4441 low would cement it. 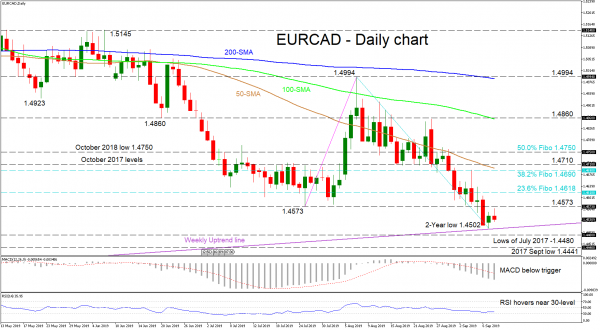 EUR/GBP Remains In Downtrend Below 0.8400

Inflation Ticks up in January, But Core Measures Edge Lower