NZDJPY’s upside correction overcame the 200-period simple moving average (SMA) on September 9 following a rebound on the new formed base of 0.6670.

Despite the MACD and the RSI moving in bullish territory, both indicators have slowed down recently, suggesting that the rally may take a breather in the short-term. The implied decreasing positive momentum in the price is drawing some caution as bullish crosses have occurred between the 21- and 200-period SMAs, as well as between the 50- and 100-period SMAs.

Overall the short-term picture is bullish, and a close above 70.57 would confirm it. A drop under the 200-period SMA would resume a neutral-to-bearish outlook. 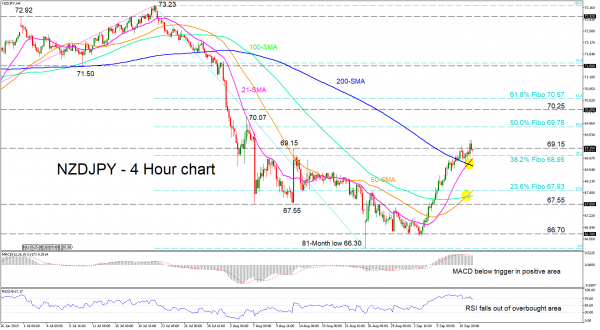