The latest inflation figures from the United Kingdom saw a larger than expected slowdown. Contrary to expectations of a decline to 1.9%, headline inflation eased to 1.7% on the year in August. This follows July’s print of 2.1%. The decline in consumer prices is likely to ease pressure of the Bank of England. However, the central bank will be staying on the sidelines, regardless as it meets later today.

GBP/USD Eases Back After Testing Resistance

The GBPUSD currency pair looks to have ended the gains after price tested the resistance level of 1.2533–1.2511. But we expect to see a firmer retest of this level before the correction begins. The downside support is seen at 1.2328. But this will be confirmed only when GBPUSD manages to move past the recently formed higher low. 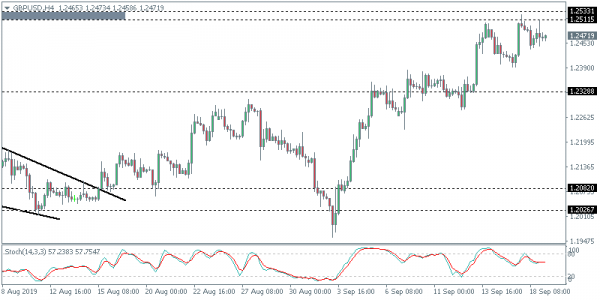