USDJPY’s further gains seem to be restricted by the 200-day simple moving average (SMA) and the upper Bollinger band around the 109.00 resistance level. Yet, the upward sloping mid-Bollinger band and 40-day SMA back an improving picture.

Despite this, the 200- and 100-day SMAs have moved horizontal, implying that a sideways move may endure. Furthermore, the technical indicators suggest that positive momentum has weakened, something also reflected in the squeezing of the Bollinger bands. The MACD is in the positive region but slightly below its red trigger line, while the RSI is hovering midway in bullish territory.

Overall, the short-term bias remains neutral-to-bullish and a break above 109.36 may turn it to clearly positive. However, a move below 106.60 could rekindle the negative picture. 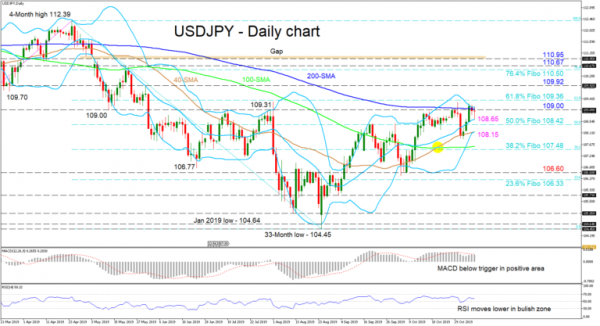