GBPUSD’s positive sentiment seems to be unbroken as the pair holds above the 200-day simple moving average (SMA), eyeing the fresh peak of 1.3011. The price bounced off previous peaks from June (now-turned-support), repowering the positive signals of the MAs and the momentum indicators.

The short-term oscillators suggest that positive momentum is improving. The MACD, is still in the positive zone but below its red trigger line, looking to move back above it, while the RSI has risen close to the 70-level. Further backing this, is the nearing of another bullish crossover of the 200-day SMA by the 50-day one and the mostly rising slopes of the 20-, 50- and 100-day SMAs. However, the turning down in the %K in the stochastics is worth mentioning, as it warns of a retreat.

Summarizing, the pair still holds a neutral-to-positive bias in the short-term. Yet, a break above 1.3011 or below 1.2768 would reveal the direction. 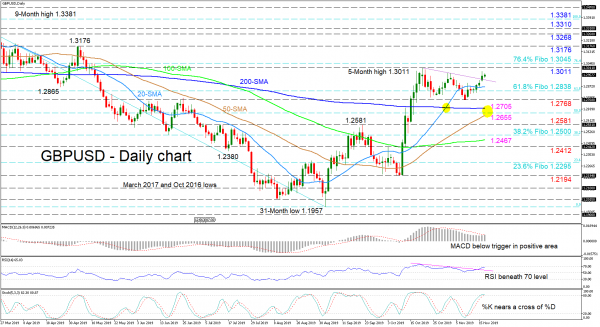