AUDUSD, although looking bearish, has eased its descent, caught between the 100-day simple moving average (SMA) – located at the 0.6831 resistance – and the 0.6767 support. The latter is the 23.6% Fibonacci retracement of the down leg from 0.7081 to 0.6670, where the drop from the down trendline was previously halted.

The short-term oscillators suggest that momentum has dried up but lean towards the negative view. The MACD has distanced itself below its red trigger line and has just slipped into the negative zone, while the RSI beneath its neutral mark has turned down. Further backing negative sentiment is the ADX oscillator, the bearish trendline and the 200- and 100-day SMAs.

Alternatively, if buyers manage to push above the 100-day SMA at 0.6831, nearby resistance could come from the mid-Bollinger band at 0.6852. Following such a break higher, a more sustained move up would be required to overcome the various obstacles in a significant resistance region from 0.6894 to 0.6930, for more gains to be possible.

Overall, the short-term bias maintains its bearish sentiment beneath the downtrend line, with a break below 0.6767 strengthening this view. 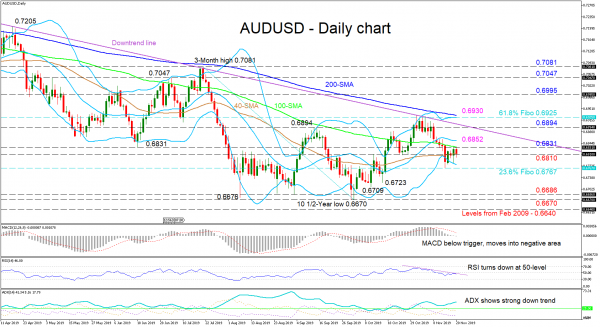 USDCHF Stands In Descending Triangle Near 0.9100