GBPNZD sellers managed to penetrate below the key support level of 2.0020, which happens to be the 23.6% Fibonacci retracement of the up leg from 1.8275 to 2.0557, the high of May and where the 50-day simple moving average (SMA) presently lies. The strengthening negative momentum is backed by the declining 20-day SMA and its nearing bearish crossover of the flattening 50-day SMA.

The short-term oscillators reflect some stalling but lean towards the downside. The MACD is below its red trigger line and has dipped below the zero line. Additionally, the RSI – despite turning upwards – remains in the bearish territory.

Overall, a bearish bias is developing in the short-term and a break below 1.9310 would strengthen it. 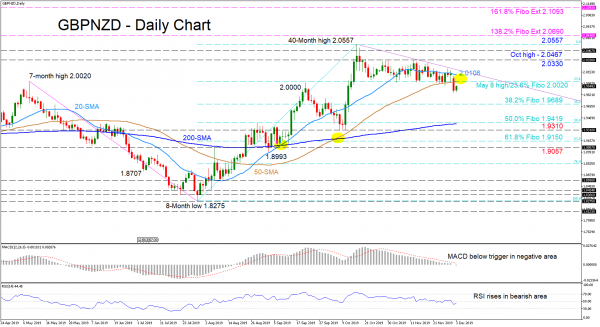