Gold’s recent push lower has come to a standstill at the 1459 level while at the same time the ADX indicates an absence of a trend. The loss in steam – in the still neutral-to-bearish picture – is also reflected by the flattening of the 50- and 100-period simple moving averages (SMAs) and the short-term oscillators.

The oscillators reflect a stall in negative momentum. The MACD, is in the negative region and below its red trigger line but has eased slightly. The RSI is climbing in the bearish zone and approaching the 50 level. Noteworthy is the convergence of the 50- and 100-period SMAs, with the 200-period SMA not too far away, which could all suggest that a sideways move could last a while longer.

Summarizing, a neutral-to-bearish bias still exists in the short-term and a break below 1446 would only reinforce the negative outlook. 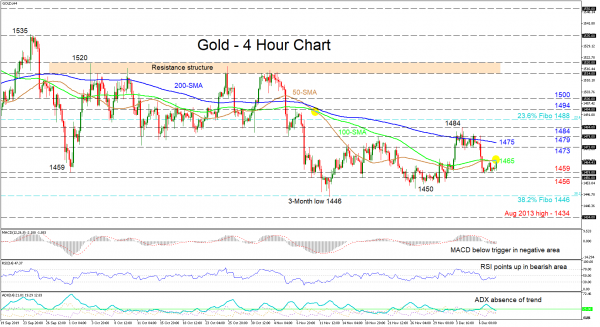 Gold And Silver Slip As US Dollar Rebounds

Gold: Yellow Metal Extends Its Losses In The Asian Session

Gold Price Settles Above $2,000 For The First Time

Market Morning Briefing: Aussie Has Dipped On A Sharp Fall Seen In Copper