EURGBP is entering bullish territory as the price is deviating above its shorter-term moving averages (SMAs) at the same time the MACD is turning positive after 5 months. The RSI and the red Tenkan-sen line are resuming their positive momentum, backing this view as well.

Before turning optimistic however, the price should first clear the key 0.8600-0.8655 resistance area as any failure to surpass that region could shift the spotlight back to the 0.8470 support level. Lower, the December 9 trough of 0.8392 may also intervene before a stronger barrier around 0.8300 takes over. If the latter fails to hold, the way could open towards the 0.8160-0.8100 former restrictive zone, strengthening the negative outlook in the medium-term picture too.

Summarizing, buying pressure seems to be increasing in the EURGBP market, though traders could wait for a decisive close above 0.8655 to confirm the sustainability of the current upside move. 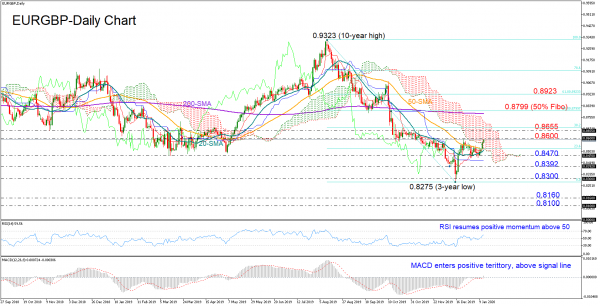