AUDUSD is slipping below a short symmetrical triangle formed between the 20- and the 50-period simple moving averages (SMAs) in the four-hour chart. However, the fact that the 20-period SMA is preparing to cross above the 50-period SMA is still sending some possible trend signals if completed.

In momentum indicators, signals remain neutral to bearish as the RSI is pointing downwards below 50, while the MACD keeps flattening around its red signal line.

Should sellers dominate below the 0.6880 restrictive area and the 200-period SMA, the spotlight will shift to the 0.6848 bottom, where any significant violation would mark a lower low in the January downfall, questioning the strength of the uptrend that started from the 0.6753 trough. In this case, the market could head for a retest of the 0.6800 round level if the 0.6830 barrier is breached too.

In short, AUDUSD is holding a neutral-to-bearish bias and only a spike above the 50-period SMA and the symmetrical triangle could return buying appetite. 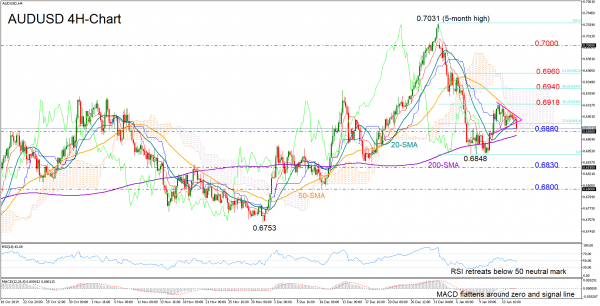