Brent futures bounced off the short-term ascending trend line on Wednesday, failing to extend the downward move. Currently, the commodity is trying to overcome the 40-day simple moving average (SMA) and the 64.85 resistance level. The RSI turned higher but is still the near 50 level, while the stochastic oscillator is gaining momentum after the bullish cross within its %K and %D lines in the daily timeframe.

On the flip side, if the oil drops beneath the supportive uptrend line, it could hit the 63.00 psychological level, inside the Ichimoku cloud and then the 61.8% Fibonacci of 61.92, switching the bullish picture to bearish.

Summarizing, Brent crude oil futures maintain a bullish bias in the medium-term as the price still holds above the three-month ascending line. 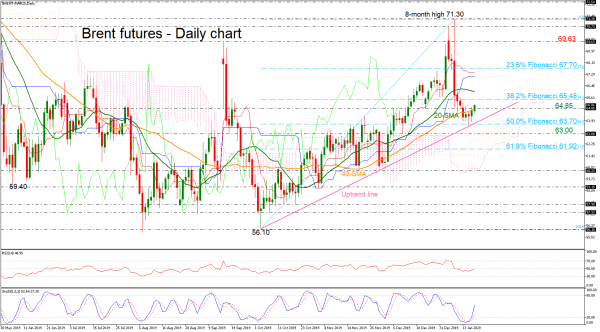 Upside in Crude Oil Prices Limited: OPEC+ Cut Prone to Ease Next Month while US Inventory Gained on Imports

Brent Futures Pull Back from More than 3-Month Peak

Emerging from Lockdown: A V-Shaped Recovery or False Optimism?