The EUR/USD pair surged to a fresh 2017 high of 1.1479, level last seen on May 2016, with the dollar suffering a major setback after US President’s son, D. Trump Jr., made publish an e-mail exchange with Rob Goldstone, a British publicist, who offered to set up meetings with the Russian government to boost Trump’s campaign by using documents that would incriminate Hillary Clinton and her dealings with Russia. The scandal sent Wall Street plummeting alongside with the greenback, offsetting news coming from central bankers and pretty much everything else. Dull trading ahead of Yellen’s testimony before the Congress and US inflation was interrupted with the news, and anyway, doesn’t seem any of both would do something to back a greenback’s recovery, as Fed’s chair Yellen won’t surprise with a hawkish stance, yet on the contrary, anything less than an ultra-hawkish tone will hit the dollar further. Additionally, US inflation has been soft lately, and one good reading won’t be enough to convince investors it was just due to temporal factors as the Fed says.

The bullish breakout of its recent range favors a continued advance, although the pair is currently standing at a critical resistance area, as the current price zone has rejected price advances pretty much since January 2015, with a couple of short lived exceptions. Nevertheless, technical readings in the 4 hours chart, are clearly bullish, as technical indicators head north at fresh July highs, whilst the price accelerated above its 20 SMA. October 2015 high at 1.1494 is the immediate resistance, with gains most likely accelerating above this last and scope then to advance up to 1.1713, the high set on August 2015. 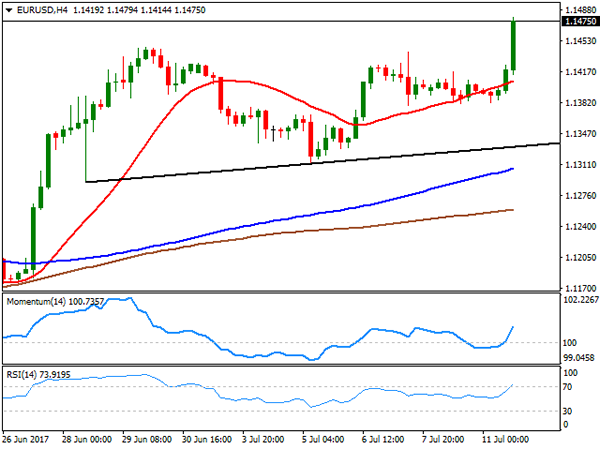 The USD/JPY pair retreated from a multi-month high of 114.49, ending the day in the red in the 113.80 region, as political jitters in the US sent the dollar lower against most of its major rivals. As US President Trump struggles to pass the Obamacare repeal bill, news showing that his son was involved with Russian representatives to interfere with the election through "dirt on Clinton," sent USD and its related assets sharply down. During the upcoming Asian session, Japan will release its June Domestic Corporate Goods Price index indicator, which is inflation at factory levels, expected unchanged from previous readings. Still, a divergence in the outcome will weigh on the pair, particularly if the news disappoint, as it will widen the imbalance between both central banks. Technically, the pair stands within a daily ascendant channel, but nearing the base of the figure after the latest slump, at 113.60 for the upcoming session, while in the 4 hours chart, technical indicators have turned sharply lower, now entering negative territory and supporting some additional declines, moreover on a break below the mentioned support. 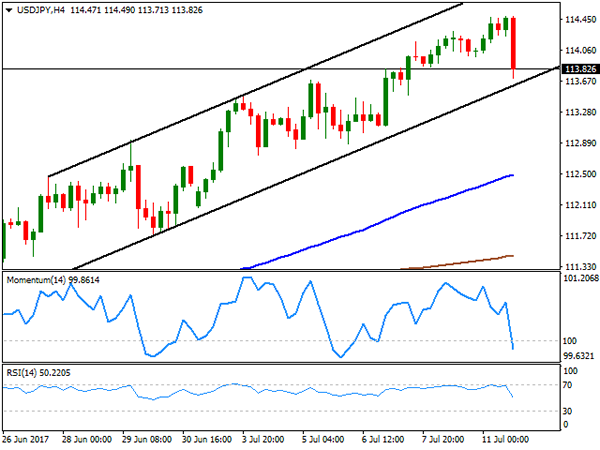 The GBP/USD pair fell to a fresh 2-week low of 1.2830, with the Pound led lower by MPC members´ comments, with broad dollar’s weakness barely enough to halt the slide. Ben Broadbent spoke on globalization and made no comments on monetary policy, but warned about the risk that Brexit will be to UK trade. Haldane, on the other hand, reaffirmed his pledged to raise rates amid resilient inflation and shrinking growth, but given that his stance was already known by the market, his positive comments did little to help the Pound. The UK will release its latest employment figures this Wednesday, with wages seen advancing modestly as well as jobs creation. Should the report disappoint, the Sterling will likely extend its fall this Wednesday. Technically, the pair has broken below the 38.2% retracement of its latest bullish run, now finding resistance around it at 1.2860, while in the 4 hours chart, the 20 SMA maintains a strong bearish slope above the current level, whilst the Momentum indicator continues to lack direction around its 100 level, but the RSI hovers near oversold levels, this last supporting additional declines ahead. The 50% retracement of the same rally stands at 1.2810, now the immediate support. 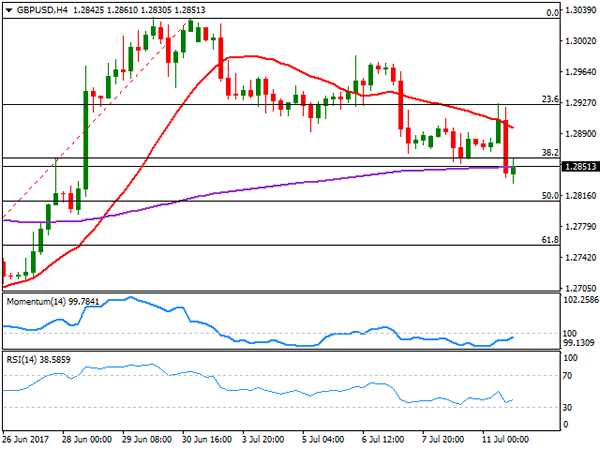 Gold prices bounced on Tuesday on broad dollar’s weakness, with spot ending modestly higher, at $1,216.61 a troy ounce. The commodity recovered from a daily low of 1,208.13 after D. Trump Jr. made public sensitive campaign information, showing that Trump was offered help against Clinton. The advance, however, was moderated, amid the cautious tone of gold buyers ahead of Yellen’s testimony this Wednesday, and US inflation on Thursday. A dovish tone from Fed’s head could send the commodity higher, but the scenario seems quite unlikely. In the meantime, the daily chart shows that the risk remains towards the downside, as the price remains well below all of its moving averages, with the 20 DMA still heading strongly south well above the current level, whilst technical indicators remain flat near oversold levels. In the 4 hours chart, the price has settled above a bearish 20 SMA, while technical indicators lost upward strength after entering positive territory, limiting chances of a stronger recovery, at least at the time being. 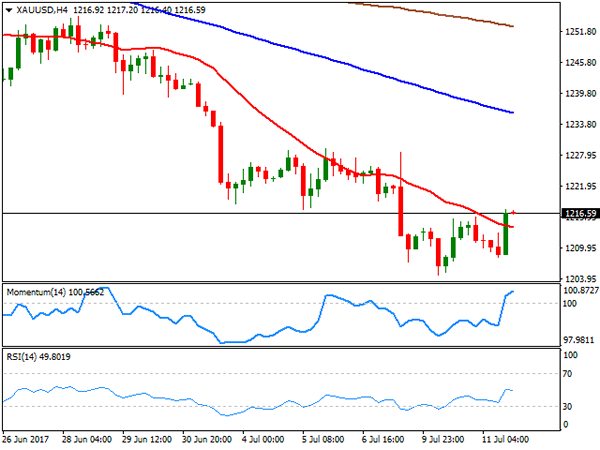 Crude oil prices edged higher this Tuesday, with West Texas Intermediate futures ending at $45.08 a barrel, helped by news reporting that the OPEC’s compliance with its output cut pledge reached 97% in June. Further supporting the commodity was an US EIA report that trimmed its forecast on US production for 2018, also cutting its price outlook to $48.95 from $50.78 previously. Ahead of stockpiles data, the daily chart for the commodity shows that the price stands above a horizontal 20 SMA, while the Momentum indicator aims higher above its 100 level whilst the RSI indicator also turned north, but around 47, rather suggesting this recovery is corrective than confirming additional gains ahead. In the shorter term and according to the 4 hours chart, WTI presents a modest positive tone as the price is above its 20 and 100 SMAs, both lacking directional strength around 44.60, while technical indicators entered positive territory, but lost upward strength. A critical resistance stands at 45.90, where the pair has the 38.2% retracement of its latest decline, and the 200 SMA in the 4 hours chart. 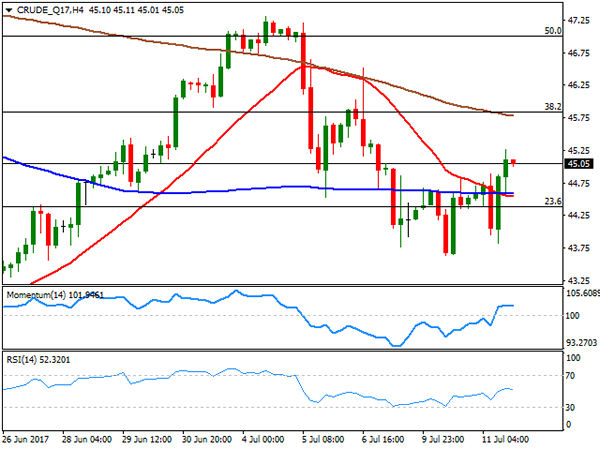 US indexes closed the day barely changed, with the Dow Jones Industrial Average flat at 21,409.07 after trading over 150 lower intraday, following the latest Trump-Russia scandal’s headlines. The Nasdaq Composite advanced roughly 17 points to close at 6,193.31, while the S&P shed 0.08%, to 2,425.53. As tech recovered, General Electric was the best performer within the Dow, up 1.32%, followed by Boeing that which gained 1.22%. Nike led decliners with a 0.92% loss, followed by Merck that shed 0.76%. In the daily chart, the index maintains its neutral stance, with the index stuck around its 20 DMA and technical indicators heading nowhere right above their mid-lines, but still with the downside seen limited, as the 100 and 200 SMAs continue heading higher far below the current level. In the 4 hours chart, the index still hovers around its 20 and 100 SMAs, both horizontal and within a tight range, while technical indicators turned south, but hold within positive territory, favoring a leg lower for this Wednesday but without confirming it yet. 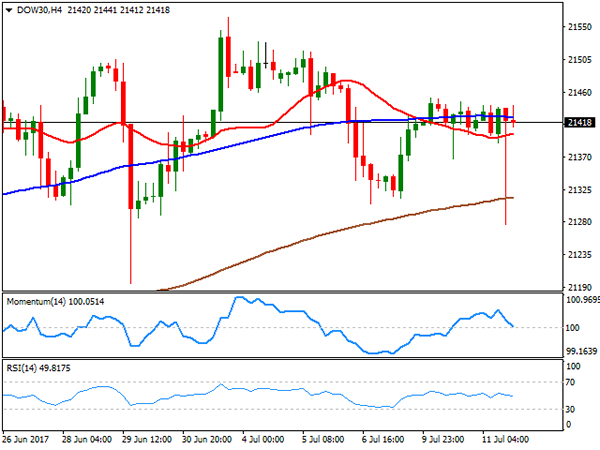 The FTSE 100 fell 40 points or 0.55% to close the day at 7,329.76, hurt by news that Pearson closed a $1 billion deal to sell the 22% stake in Penguin Random House to a German company, with investors seeing the deal as undervaluing Pearson’s stake in PRH. The company was the worst performer, ending the day 5.14% lower . The second worst performer was Marks & Spencer, down 4.69% after reporting its fiscal first-quarter 2018 like-for-like sales in the U.K. fell 0.5%. A bounce in commodities’ prices backed the mining sector, with Glencore being the best performer, up 2.14%, followed by Anglo American and Fresnillo which added over 1% each. From a technical point of view, the daily chart for the index shows that it held below its 100 DMA, meeting selling interest around it, whilst technical indicators stalled their recoveries well below their mid-lines, all of which maintains the risk towards the downside. In the shorter term, and according to the 4 hours chart, the index settled around its 20 SMA, but below the larger ones, whilst technical indicators also lost directional momentum after advancing up to neutral territory. 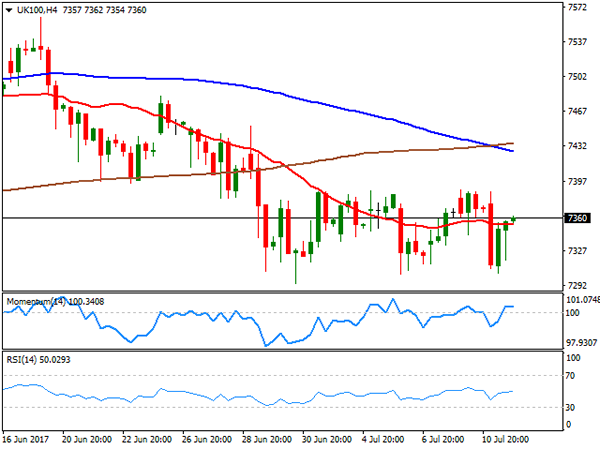 European major benchmarks closed the day lower, with the German DAX down 0.07%, at 12.437.02, weighed by real estate and building materials’ stocks. The indexes hovered within gains and losses for most of the day, with volatility limited ahead of Yellen’s testimony this Wednesday. Within the DAX, ThyssenKrupp led advancers, adding 1.96%, followed by Bayerische Motoren that gained 1.77%. Henkel AG was the worst performer, down 1.04%, followed by SAP that shed 0.82% and E.ON that closed down 0.79%. The daily chart for the index shows little change from previous updates, as the index remains trapped between a bullish 20 DMA capping the upside, and a bullish 100 DMA acting as dynamic support today at 12,370, whilst technical indicators head modestly higher within negative territory. Shorter term, and according to the 4 hours chart, a modest positive tone persists, as the benchmark met buying interest on a slide down to a horizontal 20 SMA, while the RSI indicator holds flat around 54 and the Momentum aims higher above its 100 level. 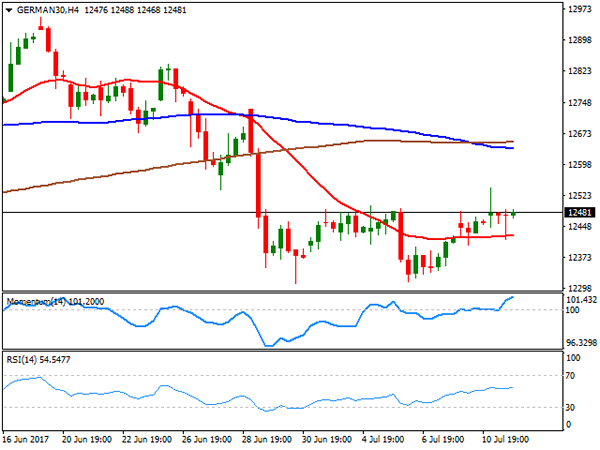