GBPNOK reverses ahead of the multi-year high of 12.21 and is finding some difficulty in pushing past the inside swing high of 11.95 (previous resistance-now-support), something also reflected in the flattening in the Kijun-sen line.

The short-term oscillators suggest a stall in negative momentum. The MACD is flattening as it remains above its red trigger line in the positive zone, while the RSI’s decline in the bullish region, begins to slow. That said, the rising Tenkan-sen line, which is distancing itself above its blue Kijun-sen line whilst the simple moving averages (SMAs) hold their gradual incline, warn of a possible advancement if buyers pick-up.

If buyers reemerge and push higher, a revisit of the fresh high of 12.16 could play out initially. Moving overhead, buyers enter an area from 12.16 to 12.27, consisting of the multi-year peak of 12.21 and tops from back in June and May of 2016. Clearing this tough region, the 12.32 resistance could prevent the climb from reaching the 12.51 high, both of which are levels that stretch back to February of 2016.

Overall, the pair may improve further if it holds above 11.95 and the Ichimoku cloud, and only a shift below 11.51 could put into question the positive picture. 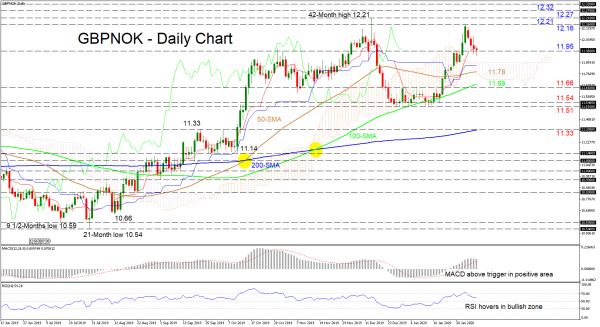