EURGBP is heading south to meet its 3-year low of 0.8275 after an unsuccessful attempt to rise above the Ichimoku cloud in previous sessions.

The main scenario is that selling pressure will persist in the short-term as the RSI and Stochastics are trending downwards in the bearish area but have yet to reach oversold levels, while the MACD is also moving with a stronger negative momentum below its red signal line.

Possibly, the downfall may take a breather within the 0.8300-0.8275 area where the market bottomed in mid-December. If that is the case, the price could stage an upside reversal to initially test the 0.8392 level, which has been acting as support from December onwards, and then challenge the area between the upper surface of the Ichimoku cloud (around 0.8470) and the 23.6% Fibonacci of 0.8523 of the 0.9323-0.8275 donwleg. Yet, for a meaningful rally, the pair may need to overcome its previous peaks within the 0.8600-0.8655 region, turning the medium-term picture from neutral to positive as well. 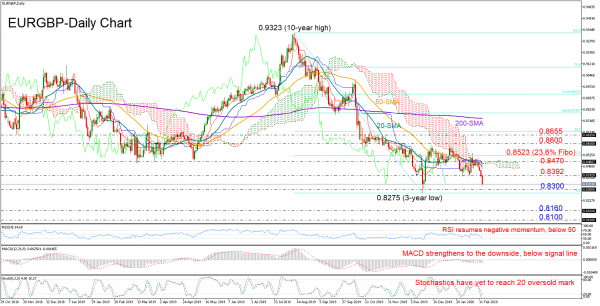 US Dollar In Tight Range Ahead Of US Retail Sales Data