GBPAUD has gained little this week but it managed to hold above the 20-day simple moving average (SMA) and re-enter the 1.9400 area, however, the technical indicators feed prospects for a possible improvement in the near term. The RSI indicator is flattening in the bullish area, while the stochastic is heading north, approaching the 80 level. That said, the red Tenkan-sen line keeps falling slightly above the blue Kijun-sen line, reflecting the recent pause in positive momentum.

On the other side, if 1.9400 proves easy to overcome, the spotlight would turn to the three-and-a-half-month high of 1.9750, reached on January 31. A successful run higher could push the pair until the next resistance, which is coming from the 2.0500 level, signaling strong buying interest.

In the medium-term picture, GBPAUD is gently pointing up over this week, framing a positive profile. A strong rally above the three-and-a-half-month high of 1.9750 would extend the upward pattern, making the outlook even more bullish. 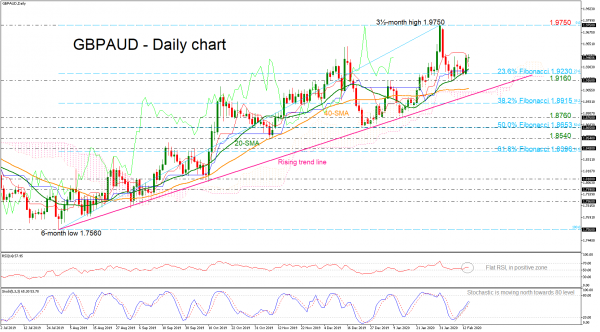