Silver staged a remarkable rally beyond the 18.00 number after closing above the 200-period simple moving average (SMA) on the four-hour chart on Tuesday.

With the RSI signaling overbought conditions and the price currently testing a former resistance area which is near the 23.6% Fibonacci of the long upleg from 13.87 to 19.63 (November 2018- September 2019), there is an increasing possibility of a downside correction.

In this scenario, the price is expected to retreat to 18.13, where it recently found some footing, and then rebound again to meet its previous highs within the 18.27-18.34 zone. If the 18.13 support level fails to hold, the decline could pick up steam towards the red Tenkan-sen line at 18.04 that has been quite restrictive over the past week, before the flattening 200-period SMA around 17.86 comes into view.

Alternatively, a closure above 18.34 may drive the price near 18.45. Any break higher could shift the spotlight on the 18.62-18.72 resistance zone. At this point it is also worth noting that the 20-period SMA is preparing to breach the 200-period SMA. Hence, if the bullish cross stays in place for longer, the market could extend this month’s rebound.

Summarizing, silver is expected to retest the 18.13 support area in the short-term as overbought signals strengthen. Yet any improvement above 18.34 would likely keep attention on the upside. 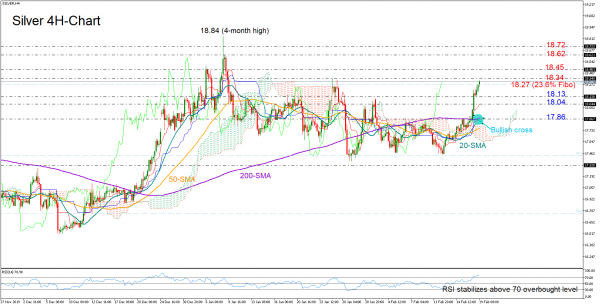 Silver: White Metal Extends Its Losses In The Asian Session

Silver: White Metal Reverses Its Losses In The Morning Session